I recently had a chance to test drive the LG 29″ Ultrawide IPS Monitor (Model 29EA93-P) for an extended period of time, and I thought I’d share my experiences with you in case you’re in the market for a new display. You’re probably saying to yourself, what’s the big deal about another monitor?

Well, I’ll tell you. What makes the LG Ultrawide special is its exceptionally high-resolution LED-backlit 21:9 LCD display, which makes it perfect for working on multiple windows at the same time. And for doing this… 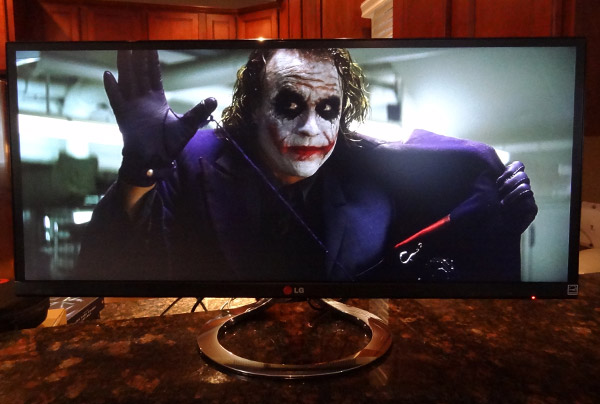 When you take the display out of the box, the 21:9 proportion display is quite eye-catching. It’s got a nice anti-glare matte finish on the screen itself, and a thin black bezel which measures about 1/2″ wide. The case has a glossy white back, and attaches easily to a chrome base that provides the ability to tilt the display. 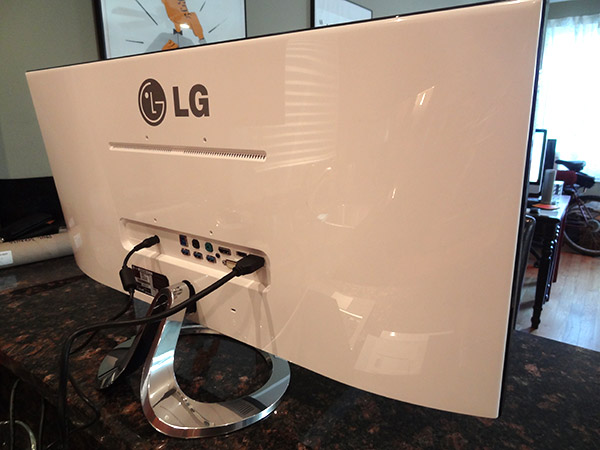 As a web designer, developer and editor myself, I always crave more screen real estate, and my workflow demands that I have both my editing window and website preview window open side-by-side. The LG Ultrawide’s crazy-wide 2560×1080 LCD screen is ideal for this sort of task. 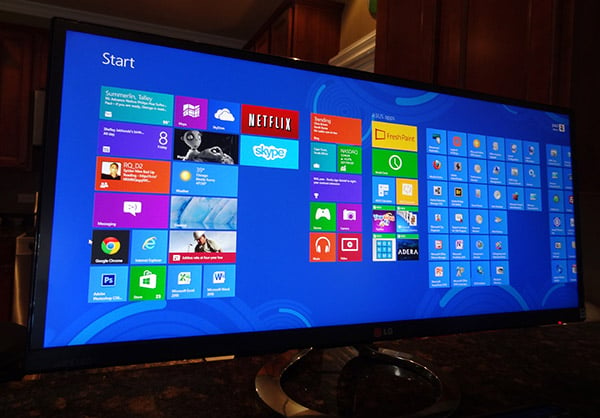 Out of the box, the display works with any graphics card that supports 2560×1080 resolution, and you can immediately bring up multiple full-page browsers next to each other. At this resolution, you can have two 1280×1080 screens side-by-side, or just get a tremendous amount of real-estate on a single window. 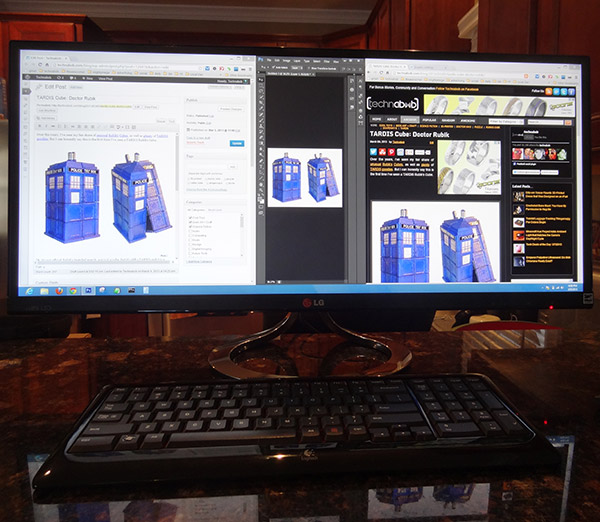 The display also supports a variety of standard monitor resolutions, including 1080p, which comes in handy if you want to watch a movie in 21:9 format without bars at the top and bottom. It can even shift 1080p 21:9 content up just enough to allow for subtitles. 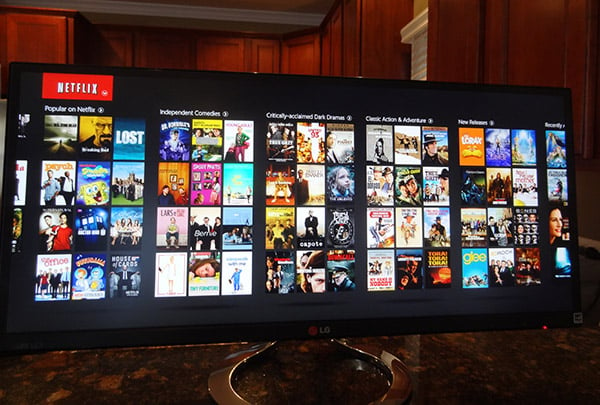 The display also ships with “Screen Splitter” software which basically allows you to automatically size and organize windows scattered on your desktop, so they each take a pre-set amount of display space, and will even force newly-opened windows into this pre-set grid. 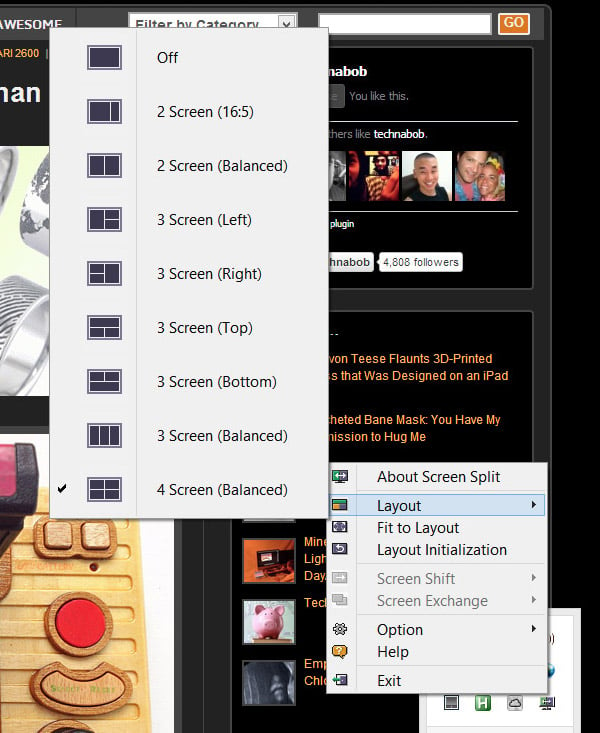 It’s a handy feature if you’re a stock trader or have to watch lots of windows at the same time, but it is only supported on Windows. That said, there is  split-screen window management software out there for the Mac – in the form of SizeUp – but Mac users will need to buy that separately. Or if you’re just interested in side-by side viewing, you can go with Windows’ built in Aero Snap or Cinch on the Mac. 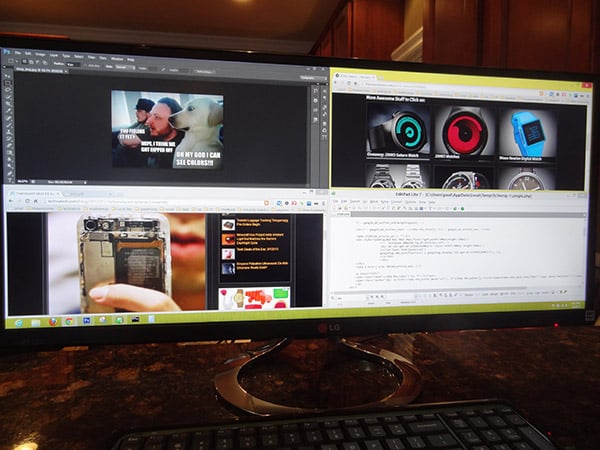 LG’s screen also has a “Dual Link Up” feature which allows you to connect two devices simultaneously, and view the content on a split screen, or in traditional Picture-in-Picture format. This could be very convenient if you want to view content from multiple devices at the same time, such as an HDMI-capable camera and your video-editing software on your computer. However, the dual-link mode doesn’t seem to support two HDMI devices at the same time – just the combinations you see below: 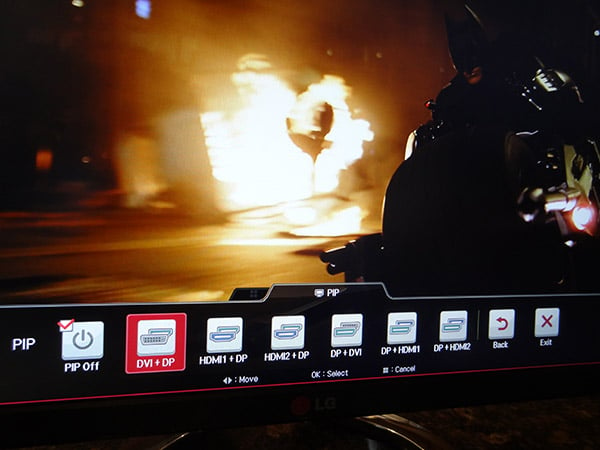 In my testing, I found the LG Ultrawide display to be sharp, bright, and easy-to-read – providing good screen uniformity and contrast levels. While it’s not quite as sharp as the display on my 27″ iMac, even the smallest letters were crisp and without noticeable fringing. The display worked immediately with the built in Intel graphics chipset on my Asus Zenbook Prime, connected via the micro-HDMI port on the ultrabook, as well as with the HDMI port on my PS3, and on a random Android tablet I tested it with as well. However, I did not get to test the display with a Mac, since I didn’t have the appropriate Mini DisplayPort adapter cable on hand to use with my iMac. 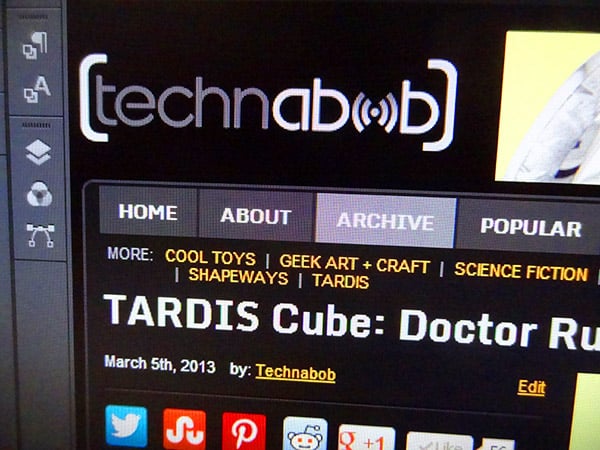 The controls on the display are set under the bezel at the front right, and seem to be using some sort of touch-sensing tech, since they don’t need to be pressed to be used. If I have any complaint about this display at all – and it’s a minor one – it’s that the buttons are a little too sensitive, and easy to accidentally trigger. I also didn’t care for the less than intuitive OSD menu navigation, but I’m nitpicking. You won’t be touching these controls very often unless you’re switching between multiple devices anyhow.

In terms of connectivity, the display offers two HDMI ports, a DisplayPort jack, as well as a DVI-D input and a built-in USB 3.0 hub with 3 ports. The second HDMI port also supports MHL, a growing standard for playing video from smartphones and other mobile devices. LG even is kind enough to include an MHL to HDMI cable in the box (though it would have been nice to get a regular HDMI cable too.)  It also supports VESA wall mounts, and Kensington security cables. 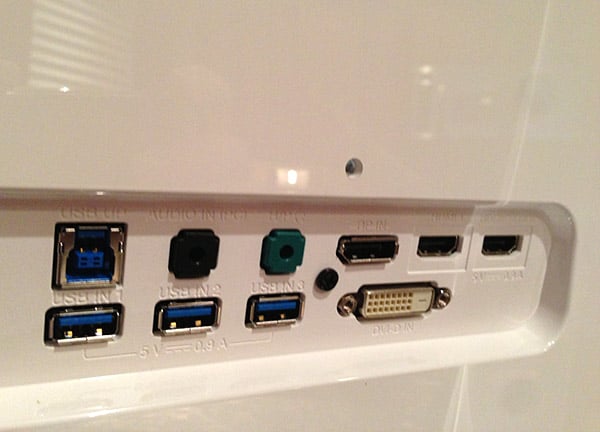 The display also has small stereo speakers built in, so if you connect via HDMI, DisplayLink, or plug in audio via the 3.5″ mini jack, you’ll get sound. It won’t blow your eardrums, but it’s plenty sufficient for office use, and you’re not buying something like this for the sound anyhow. 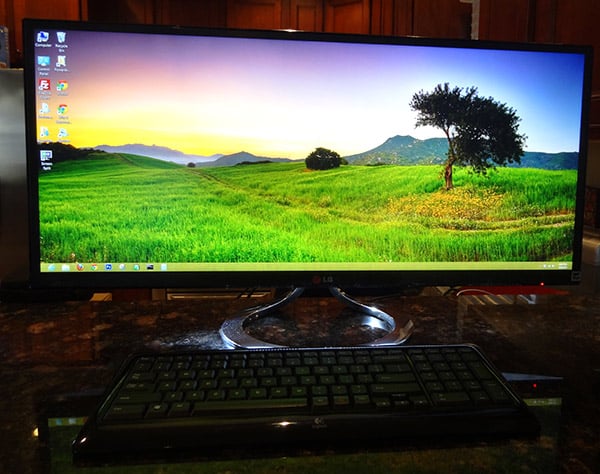 Overall, I’m impressed with the display quality and utility of the LG Ultrawide display. It provides a ton of screen real-estate, and a configuration that’s ideal for side-by-side window viewing, or watching 21:9 video content. It’s a great alternative to multiple monitors for graphic designers, web developers, video editors, and other creative professionals. On the other end of the spectrum, it’s also great for pencil pushers, since you can open massive spreadsheets on this thing as well.

You can order the LG Ultrawide IPS Monitor from Amazon for $699(USD), and can find more details on the LG website.

Disclosure: LG provided us with the device for review in this article. However, all reviews are the unbiased views of our editorial staff, and we will only recommend products or services we have used personally, and believe will be good for our readers.