I’m sure that this is just a small taste of what we can expect from future robot competitions, just with less killing of humans. This competition is designed to attract more young students to the field of robotics and for today at least, it looks pretty fun. Let’s all enjoy it while we’re still alive. 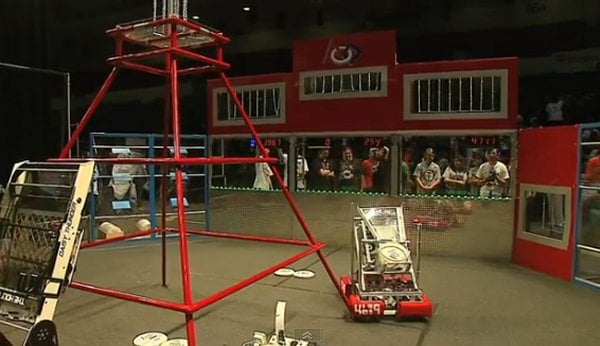 The annual First Robotics Competition is being held at San Diego’s Valley View Casino Center aka Sports Arena. The seventh annual competition will have 60 teams. They will compete using 100+ pound robots in a game where they score points by throwing frisbees into a slot in the wall and then climb metal pyramids.

The match starts with a 15-second period where robots operate independently. Each frisbee scored is worth additional points. For the remainder of the two-minute match, drivers control the robots remotely and try to score as many points as possible. Then they try to climb a pyramid. The higher up they get, the more points they get.

The championship will be held in St. Louis on April 24 to 27 and there are $16 million(USD) in scholarships for competitors to win.