Adobe Photoshop CS 5 and CS 6 have a set of features called Content Aware. They automatically fill in gaps or selected areas in images as if those gaps or parts were never there. It’s not perfect, but it can be a time saver for many operations. This prototype software is like Content Aware for videos – it can edit moving subjects out of a video while the background remains more or less untouched. 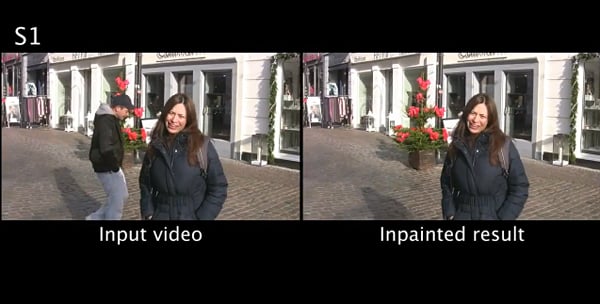 Researchers from the Max Planck Institute for Computer Science and University College London’s Computer Science department developed the wonder software. From what I can understand, the program works by marking the subject(s) to be removed and the one(s) to be retained. Then, for each affected frame, the program will look at a source frame elsewhere in the video where the background is not blocked by the object to be edited out, and use this source material to “inpaint” the section back into the image.

I think the software works best when the moving object to be edited out is over a static background, i.e. it won’t be as effective when there are like a hundred people moving and you want to remove someone from the foreground.Watch the video for a demo (and a way better explanation):

How awesome is that? I don’t know how much of the process is automated though. Head to MPII’s website for more information on the program.