LEGO Machine Folds & Launches Paper Planes, is Having More Fun Than You Are

YouTuber Hknssn may be missing a few vowels, but that hasn’t kept him from being awesome. He was able to make a LEGO machine that can automatically take a sheet of paper, fold it into a paper plane and then launch it on its own. In other words, Hknssn made a toy that makes its own toys. 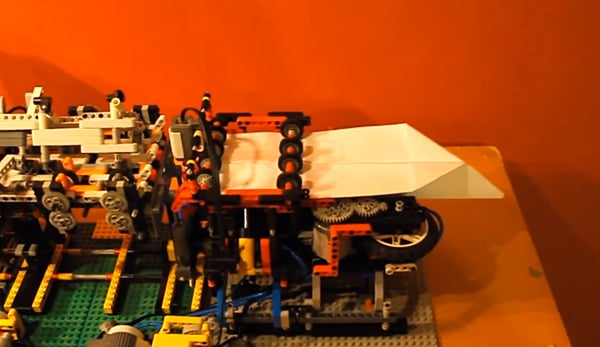 The machine is about 59″ long and 16″ wide. As you might have guessed, Hknssn relies heavily on LEGO Mindstorms NXT parts to make the machine work, including two NXT Intelligent Brains, five NXT servo motors, four NXT color sensors and an NXT accelerometer. It also uses five Power Function XL motors and between 6,000 to 7,000 LEGO pieces. Check it out in action in the video below, which Hknssn hiked up to about three times the normal speed.

Hknssn shared the parts list of the machine on YouTube and a shot of its 3D model on ImageShack, but it seems he didn’t make a guide for building one. He’s probably working on a LEGO machine that can do that for him.