Man, I broke so many arcade records back in the day, but one game that I was never very good at was Missile Command. The game was released in arcades in 1980, and later that year on the Atari 2600. Two years later, a high score was set that hasn’t been broken for the last 31 years. Now a player finally managed to beat it. 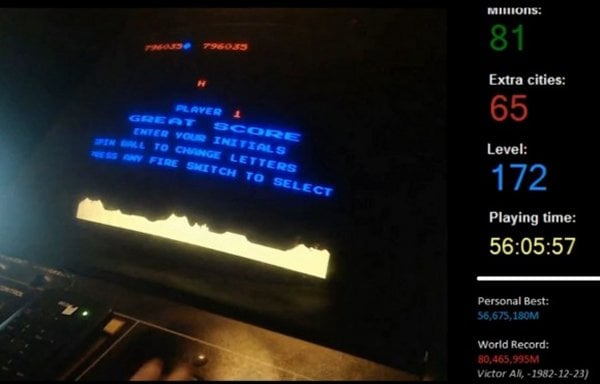 The 1982 record was set by Victor Ali who played the arcade version for 56 hours and got a score of 80,364,995. It’s easy to see why the record stood for so long. Who wants to stand there for that many hours? Well, another Victor was not afraid to go for the gold. Victor Sandberg from Sweden.

Over the last couple of days, Victor live-streamed a single coin game of Missile Command that lasted 56 hours, 5 minutes, and 53 seconds. The record wasn’t shattered, but he beat it with a final score of 81,796,035, making it to level 172.

Now it will be up to another to try and steal the title. Any takers? Only one prerequisite: your name must be Victor.