Over the years, there have been numerous attempts to make motorized shop tools out of LEGO. Now, the guy behind the LEGO 3D milling machine is back with a new creation – a lathe that can create custom forms by tracing a simple outline. 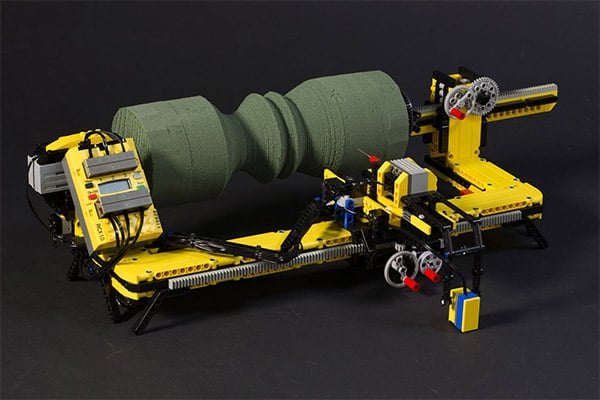 Arthur Sacek actually made his first LEGO lathe back in 2005, and now he’s remade the machine and shared it with the world to enjoy. The machine uses LEGO RCX components (now known as Mindstorms), and can cut cylindrical forms from floral foam using a spinning bit. To make a shape, Arthur loads up a block of foam, then draws a curve profile on a white piece of paper. The system then automatically traces the line and carves the shape from the rapidly-spinning foam. It’s quite impressive in action:

The LEGO motors probably aren’t powerful enough to turn wood, though I wonder if it could handle something soft like balsa.