If you’ve been following Technabob for a while, you know we have mad love for the console modding and hackery of Benjamin Heckendorn (aka “Ben Heck”). So I was thrilled to have the opportunity to sit down and ask Ben some burning questions about modding, custom builds, classic gaming, and pinball. 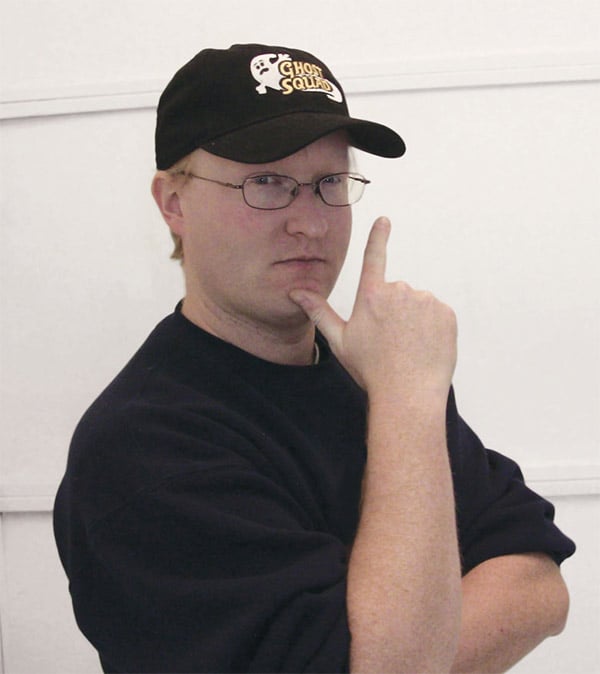 TB: How long have you been doing custom builds and mods? What was your very first casemod or custom build?

Ben: It was the year 2000, and back then I was a graphic artist, and I just wanted a new project to work on for a hobby. I thought about my old Atari games when I was a kid… so I dug up an old Atari 2600… and thought I could make it portable. I made a GeoCities site about my project, and all of a sudden all of this interest came pouring in. I just couldn’t believe people cared so much about those old systems…That’s where it all started. 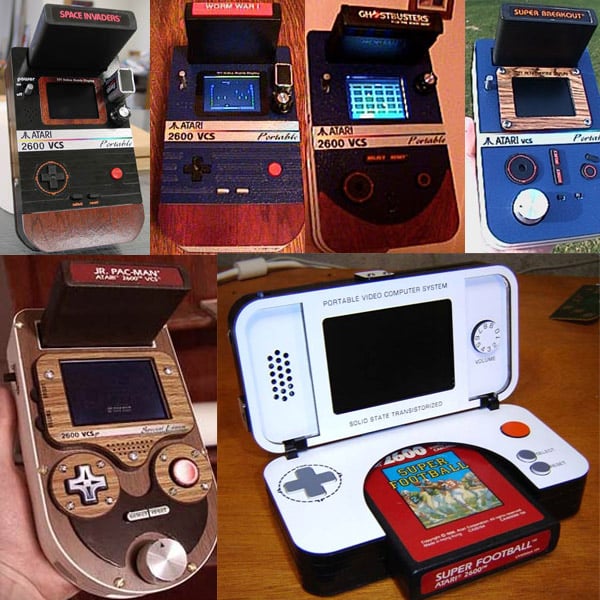 TB: I know you’ve build countless custom systems over the years. Is there any particular system that stands out as your personal favorite? Why?

Ben: Probably it’s the Atari 800 laptop that I built. The reason that was special for me was that was the computer I had as a kid… I also made a Commodore 64 along the same lines… It’s just kind of great to bring back the memories, and build something cool that also looks like something that would have come from that era. 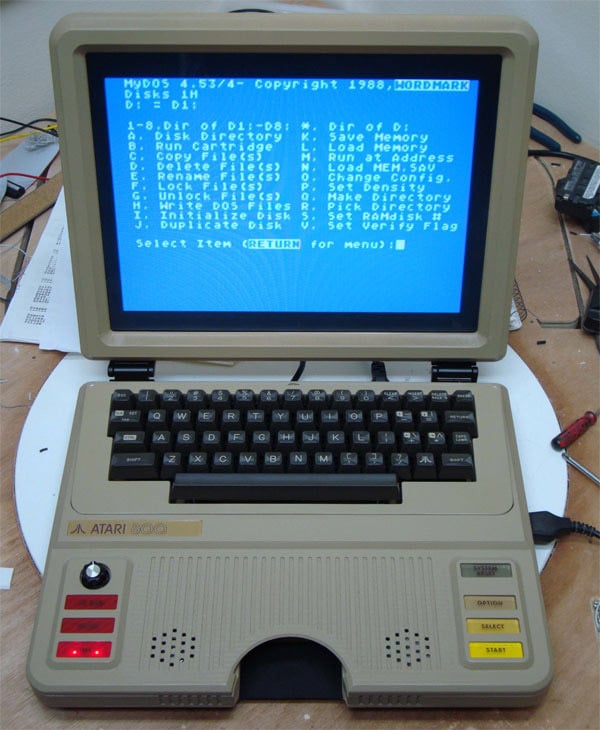 TB: What was the most difficult mod you’ve done? Why?

Ben: The first Xbox 360 laptop that I built. I didn’t really know what I was doing, and I tried a lot of dumb things like water-cooling… That I’ll never try again… That one really kicked my butt, but it got me a new legion of fans, so it was worth it in the end.

TB: On a related note, which system was the most difficult to get inside of without damaging it?

Ben: The Xbox 360 is the most difficult to take apart… All of the PlayStation 3 versions, the Wii and the Wii U are actually quite straightforward to take apart compared to the Xbox (360). The Xbox (360) is like this snap-together ball of frustration. Once you get inside, it’s very standard and computer-like, but its outside is like a hard nougat shell. 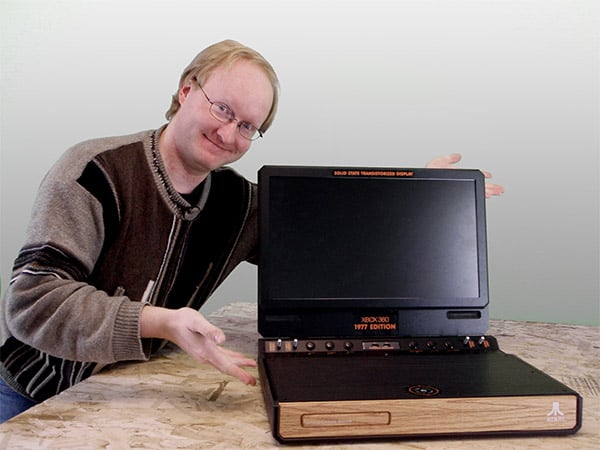 TB: What was the biggest surprise or strangest thing you found when you cracked open a system?

Ben: One of the coolest things… the PlayStation 3 – the second model and the third model – both of them have this sort of wind tunnel cooling system that goes over the CPU and the power supply. That looks like a sort of modern car engine. They even have a label on it that says “Sony Computer Entertainment” on it, like they expect you to see it, maybe.

As far as strangest… it’s always humorous when you find hot glue or masking tape inside of something. It makes you feel not so bad about making your own kludgy fixes.

TB: Do you have a favorite gaming system?

Ben: Of all time… the Nintendo 8-bit was a classic system. I still have one on the TV in my living room. Current gen… I (used to) spend alot of time on my Xbox 360, but nowadays since consoles are ancient, I play on PC.

TB: What’s the craziest modding request you’ve ever received? Did you end up building it?

Ben: An editor from Joystiq wanted an Xbox 360 controller built into his rowing exercise machine handlebar, so he could play UNO while exercising. I actually built that… I welcome crazy requests, because those are really the ones that are interesting to me – and other people too.

TB: I understand that you’ve built a number of gaming and input devices for individuals with disabilities. Can you elaborate on your efforts in this area?

Ben: I build those controllers every so often. The last one I did – Crystal Dynamics contacted me – they had a big Tomb Raider fan who had trouble reaching the shoulder buttons on the top of the controller… People take for granted having two hands to hold a controller, but a lot of people can’t bring their hands together, they can’t move their hands around the sides of the controller, they can only hit the surface buttons, etcetera. So what we did for her, (was a) custom controller where the right bumper, left bumper and two analog triggers were on the face of the controller, where your palms usually go. 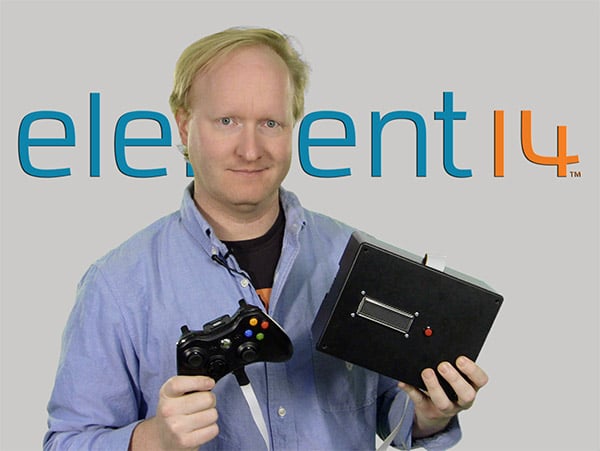 TB: I know you also love pinball, and have built your own machines. Can you elaborate?

Ben: Right now it’s a very expensive hobby – and even more difficult than expensive. A friend of mine started a new pinball company. He’s making his own games, but I told him about this Ghost Squad game I’m working on that’s pretty far along and asked him if maybe he could build mine too. That way people could play the game that I built, instead of me just building one game. Like a lot of the stuff that I’ve done, it’s a hobby or an experiment that I am trying to turn into a job… or a way to make money. 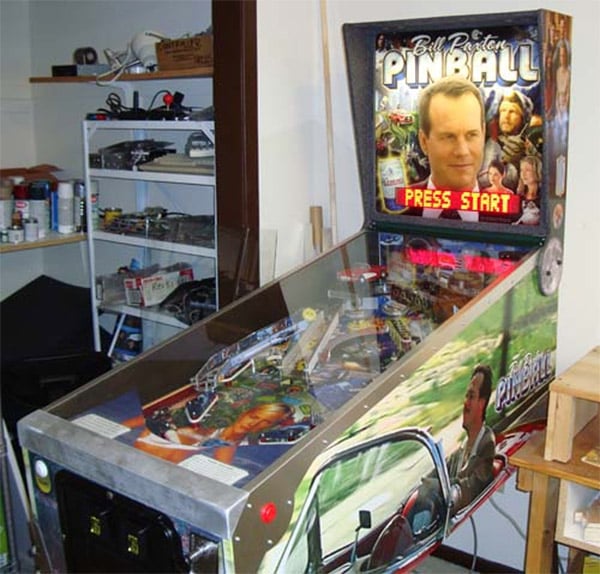 TB: What’s your favorite pinball machine of all time?

Ben: I really like Attack from Mars – I can’t really justify the cost of one these days. That game is getting stupidly expensive. All of the games I’d really like to get are are getting way expensive, like Tales of the Arabian Nights, Medieval Madness or Monster Bash.

TB: Are you doing custom commissions these days? If so, how can readers get in contact if they want a custom build?

Ben: Yes, I’m always doing custom commission work. I have a website, benheck.com, and there are pages re: custom work with an idea of custom prices and what-not. Just don’t ask for Nintendo 64 portables.

Ben Heck will be showing off his Ghost Squad pinball machine at this weekend’s Midwest Gaming Classic in Brookfield, Wisconsin, and also just wrapped up his Xbox 360, PS3, Wii U Ultimate Combo System over on The Ben Heck Show on Element 14. For those of you interested in custom mods, you can check out Ben’s available services, and approximate build and design rates over on his website.