I completely understand that it’s difficult for small retail store owners out there to make a buck today. After all, we have Walmart offering incredibly low prices that most smaller retailers can’t compete with in the retail market and then you have mega-stores like Amazon dominating when it comes to online shopping. The big problem that many retail stores have is that consumers are increasingly “showrooming” at their stores rather than buying. Showrooming is the phenomenon of shoppers coming into a retail store to see and touch a particular item and then going online or to a Big Box retailer to actually purchase. 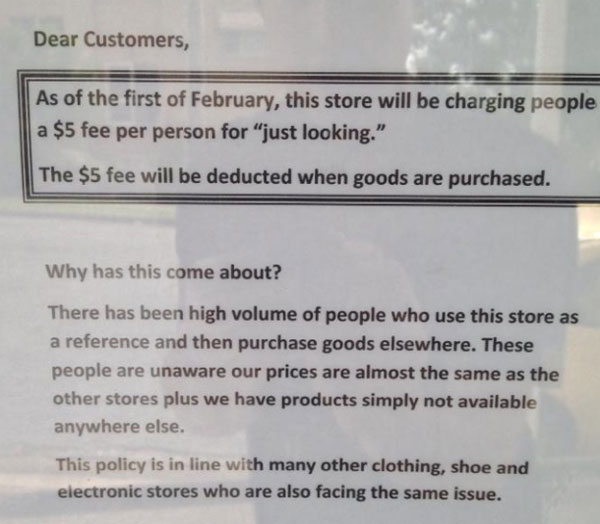 While Big Box retailers such as Target turn lookers into buyers by selling at low margins and high volume, one store owner in Brisbane, Australia is taking completely different tact. The store owner has decided that the answer to showrooming is to charge everyone who steps in the door five dollars to look around. The owner has graciously offered to remove that five dollar fee from the price of any goods purchased.

The image you see above is the sign that the storeowner attached to the window, which claims that the policy is in line with other electronic stores, clothing stores, and other retailers. This is the first I’ve ever heard of such a policy, so I have no idea what he’s talking about.

What this guy fails to realize is that if people come into your store, at least you have the chance to make a sale. If you want to charge me five dollars just walked through the door even if I don’t find anything I like, I simply won’t come to your store.