A little while back, I had a chance to drive the Chevrolet Volt during the Chicago-to-Evanston EV Rally for a couple of hours. My curiosity was piqued enough by that experience that I arranged with GM to put the little plug-in hybrid through its paces for a full week. So with that said, here’s my hands-on review of the 2013 Chevy Volt. 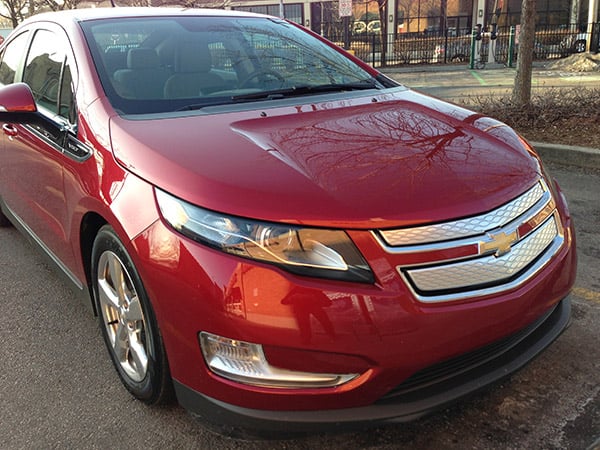 My main objective for this test was to drive the Volt just as I would my regular car, driving to-and-fro in the city here in Chicago, picking up groceries, going out to dinner, and taking the occasional road trip. I figured this real world test would be the best way of knowing how well a plug-in electric vehicle would fit into my lifestyle, and then share these experiences with you. 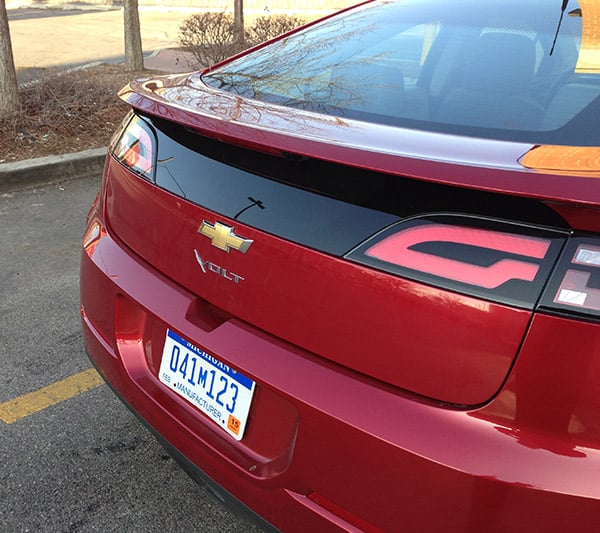 For those of you without too much knowledge of the Chevy Volt, the vehicle uses an electric drivetrain, dubbed “Voltec” – with a a primary and a secondary motor to drive the front wheels. The car is designed to drive entirely on battery power for up to 38 miles, and then a gas engine kicks in to extend your range up to about 375 miles. But unlike traditional hybrids, the gas engine rarely drives the wheels. The Volt’s engine is basically a generator on wheels for keeping the electric motors running once the battery has drained out (and in a few other scenarios which I’ll explain later.) It’s also capable of boosting power under load and at high speeds by engaging the gas engine to help mechanically drive the wheels, like a conventional hybrid. It’s this powertrain versatility that really differentiates the Volt from its competitors. 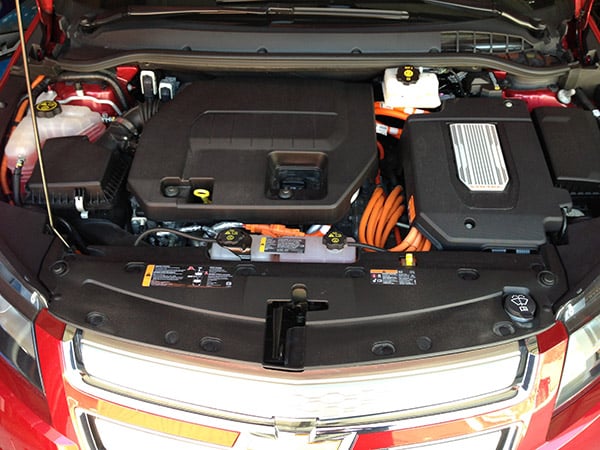 I started out my first ride in the Volt with a fully-charged battery pack. Charging the battery is a simple process which involves either plugging into a high-voltage “Level 2” 240VAC connector (typically found at commercial charging stations), or into a standard 110VAC household outlet. When connected to a Level 2 charging station, the Volt can go from an empty battery pack to full in about four hours. In my tests on my regular 110VAC outlet, it took about 12 hours. 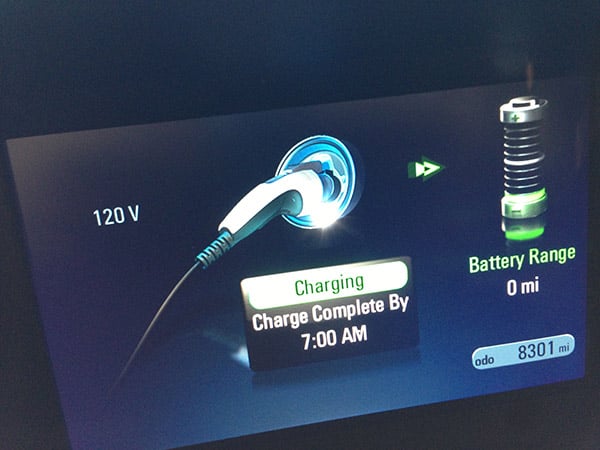 For me this wasn’t a problem, since I’d park the car in the garage at night when I came home, and typically didn’t go out until late in the morning. And even if the battery isn’t fully charged, you always have the insurance policy of the gas engine as a backup. If you need to charge up an empty battery in less time, you can always have a Level 2 charger installed at your home for about $2000, and some of this expense can be recovered via tax credits and rebates. 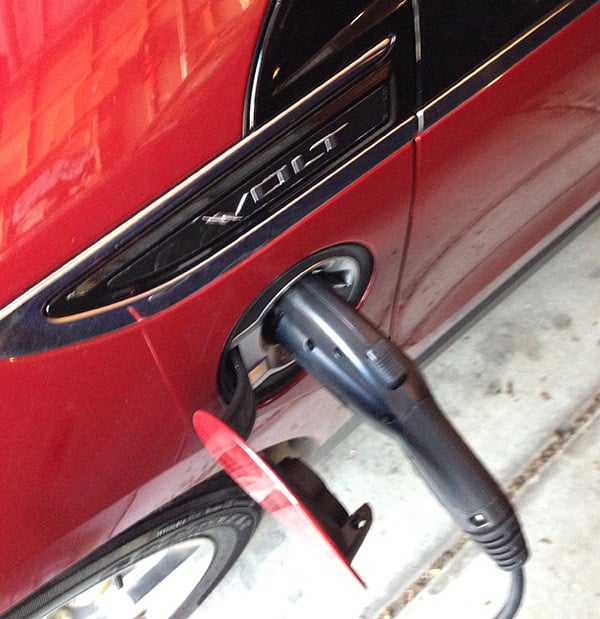 For the most part, I drive short hauls in the city and suburbs, and found that for the first 3 days I drove the car, I used virtually no gasoline. In fact, the only time the gas engine kicked in and sipped any fuel at all was for a minute here or there when the temperature was exceedingly cold. The Volt’s charging system automatically does this to help heat up the cells to their optimum temperature if they’re too cold. While the temperature outside was typically around 20 to 35 degrees during my entire test, this only kicked in a couple of times during the week. That said, I can imagine the gas engine kicking in more frequently in the depths of winter to help get the batteries up to temperature. 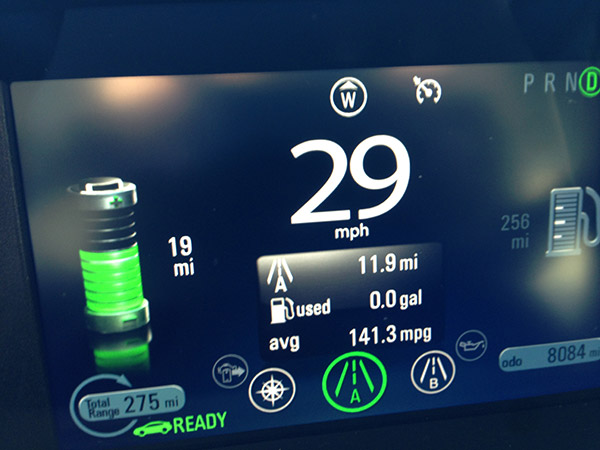 Interestingly enough, the sticker reports fuel economy of 98 MPGe on electric power, and 37MPG on gas power. But as they say on the Internet, “YMMV,” and mine definitely did – in a good way. In fact, I managed to achieve a peak of about 163 MPGe towards the end of my battery charge. Of course, that doesn’t mean that much, since batteries don’t use gas at all. The only reason there’s an MPGe rating at all is so you can figure out how much gas you’re using when the gas engine has to kick in. 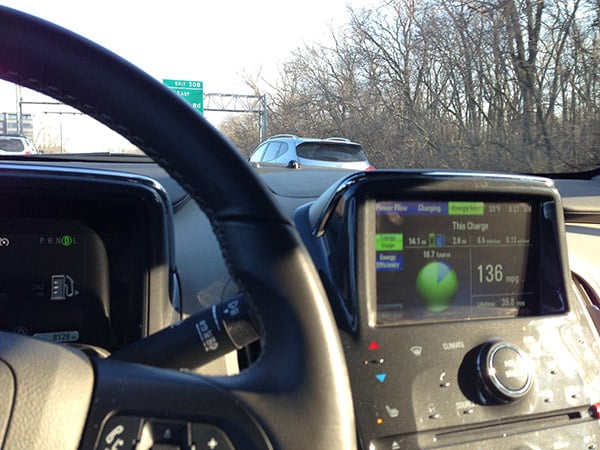 As for the gas engine, it’s a small 1.4L 4-cylinder, that’s more than capable of pulling the Volt down the road for longer road trips. In fact, I took a 200 mile road trip one day to see how the Volt would handle the transition from electric to gas operation. I was pleasantly surprised that the transition is virtually seamless. Moments before the battery runs out of juice (which was at about 29 miles on such a cold day), the gas engine simply kicks in and takes over. The car is well insulated, so engine noise is minimal when running, though I did kind of miss the complete silence of those times when I was on full battery power. It’s kind of a cool feeling. After my road trip, my MPGe had dropped to about 55, which isn’t too shabby, and I still had enough gas left to go another 150 miles. 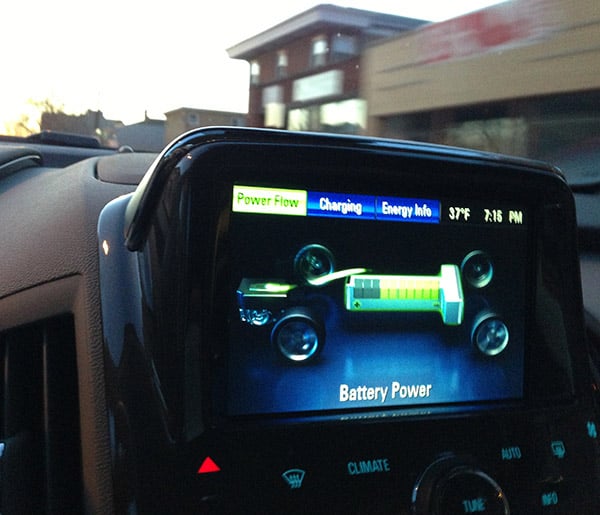 If you have any concerns about how zippy an electric vehicle might be, you can stop worrying. Its motors are capable of pushing out an admirable 273 lb.-ft. of torque, which lets you take off from stop lights with smooth and instantaneous acceleration. Sure, its 8+ second 0-to-60 time isn’t track-worthy, but that instant acceleration is quite nice when hitting an entrance ramp on the highway. I never felt that the car was underpowered, even at highway speeds. 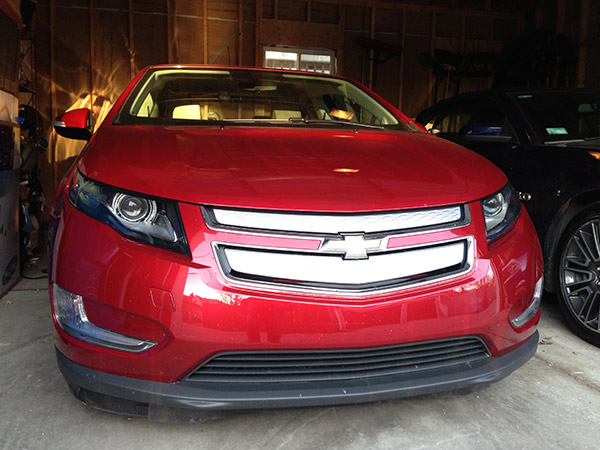 Beyond its drivetrain, the Volt is actually a very nice little car. It’s got ample front seats and headroom for two tall adults, though the back seats can be pretty cramped if you’ve pushed the front seats back for people with long legs. There’s also a nice-sized hatchback, and split 40/60 folding rear seats – providing plenty of room for groceries, packages and luggage. There’s also a storage bin for the vehicle’s 110VAC charging cable, an air pump and tire sealant in place of a spare tire to cut down on weight and space requirements.

As equipped, my Volt had a really nice tech package, complete with GPS navigation with traffic information, XM radio, Bluetooth hands-free smartphone integration, Pandora and Stitcher apps, and 3 years of GM’s OnStar service. Most of the tech is accessed on a nice 7″ touchscreen, with touch-sensitive dash controls for frequently accessed features like temperature, radio volume and the like. There are also steering wheel controls for hands-free phone and media playback, as well as cruise control. Other bells and whistles include a USB charging jack, keyless entry and remote start, an LCD driver’s information cluster, and heated remote control mirrors. The optional heated leather seats made my backside nice and toasty, and also cut down on the need to drain power with the primary heating system. 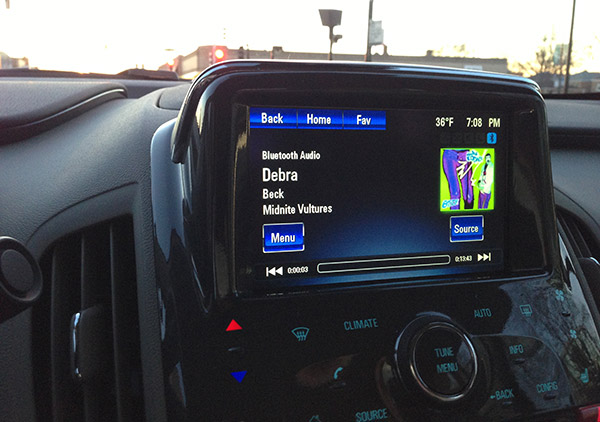 Overall, I was very impressed with the Chevy Volt. Living in the city, with relatively short daily commutes, and a garage, I’m the perfect customer for this car. The only issues I found with the car were the extremely low front aerodynamic cowl, which scrapes on just about every speed bump, and the less-than-stellar rear seat legroom, but those are minor concerns. If you drive less than 15 miles each way to work, and have a place to plug it in, you could theoretically go months between filling up the Volt’s diminutive 9.3-gallon gas tank. Plus, the gas engine backup gives you the peace of mind that you can take the occasional long road trip without worry about finding a charging station along the way.

Lest you have any worries about battery life and replacement cost, Chevrolet allays those fears by including an outstanding 8-year/100,000 mile warranty on the battery pack and Voltec system. The rest of the drivetrain gets 5-year/100,000 mile coverage.

Base price for the Chevy Volt is $39,145(USD), but the fully outfitted model I drove had a sticker price of $43,020. Most of that cost was for the leather heated seats, polished aluminum wheels and red paint tint-coat, but about $1,500 was for the navigation and Bose speaker systems which, as a tech guy, are must-haves. While that is definitely pricey for a Chevrolet, you’ll save substantially on fuel costs, and could reduce your cost by as much as $7,500 in federal tax savings. Some states also offer local tax credits for EV and hybrid vehicles. Illinois, for instance has offered tax rebates up to $4,000, though the program is currently on hiatus, and likely to return later this year. There are also tax breaks available if you decide to install a Level 2 charging station in your home or garage.

Disclosure: Chevrolet provided the loan of the car for review in this article. However, all reviews are the unbiased views of our editorial staff, and we will only recommend products or services we have used personally, and believe will be good for our readers.