HTC One Gutted for Posterity, But it Wasn’t an Easy Task

I’m a fan of gadget teardowns if for no other reason than to see exactly what’s on the inside of some of the coolest gadgets out there. Not too long ago I mentioned that iSuppli had performed a teardown of the Samsung Galaxy S4. The caveat there is that the company didn’t actually have a device to work with, so they only guessed what was inside.

On the other hand, iFixit has got their hands on the new HTC One smartphone and did a teardown the old-fashioned way using heat, screwdrivers, spudgers, and copious amounts of gadget lust. 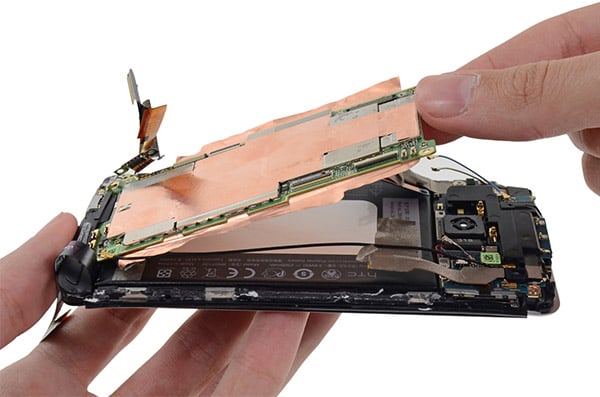 The result of their work is a gutted HTC One smartphone showing us all the glorious insides. The downside is the One isn’t the easiest device to open up. In fact, it took the gadget surgeons over half an hour just to take the back cover off, and while doing it, they damaged the plastic bezel which surrounds the aluminum case.

Once inside, they found the brains of the operation – a Qualcomm Snapdragon 600 quad-core CPU, running at 1.7 GHz, along with 2GB of DDR2 RAM, 32 GB of Samsung flash memory, Qualcomm power management and 4G modem chips, a Broadcom combo 802.11ac/Bluetooth 4/FM receiver chip, and a variety of other utility chips.

The HTC One’s 1080p 4.7″ LCD may look great, but it’s a pain to replace – as you have to take everything out of the rear case, including the motherboard – before it can be removed.

In the end, iFixit gave the HTC One an abysmal repairability score of just 1 out of 10. If you worry about breaking your smartphone and being able to fix it, you’d be better off buying insurance. Easy repairability just isn’t in the cards with the HTC One.