Bacon Condoms: Pork for Her Pleasure

Guys hate condoms right? But everybody loves bacon. Now everyone will want to use condoms since they come in… bacon flavor. Like the box says, they “make your meat look like meat.” Now that bacon condoms exist, no children will ever be born again. Because… bacon. 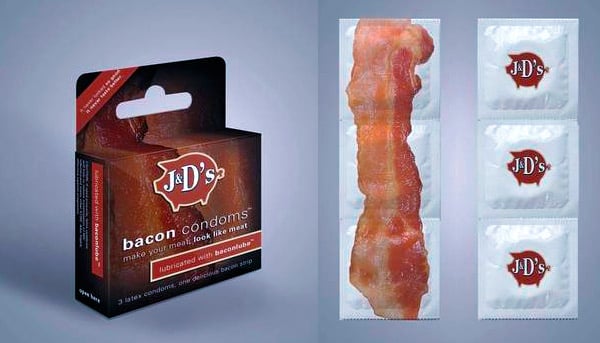 These bacon condoms come from J&D’s (the guys who made Bacon Salt) and aside from making your junk look like bacon, they have “baconlube”, an ultra premium water based meat flavored personal lubricant. You can’t go wrong with that. Or can you? Now you can make bacon in the bedroom as well as on the stove.

I’m pretty sure this is an April Fool’s joke, but that doesn’t mean it isn’t an idea whose time has come.