Automation company Festo loves showing off its technologies and expertise by creating robot versions of animals. We’ve featured the company’s SmartBird before, and you may have also seen its AirPenguin in action. Now the company has released information about its latest pet project, the BionicOpter. 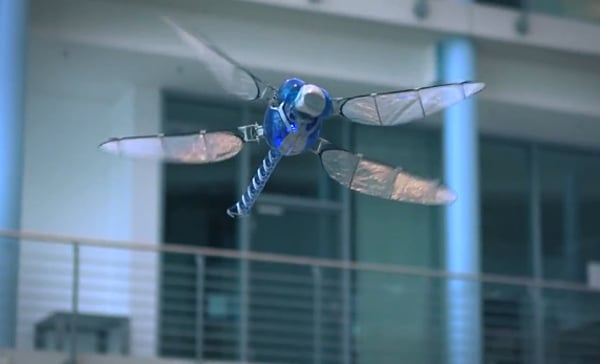 With the BionicOpter, Festo set out to replicate the flying capabilities of the dragonfly. The company says the insect is unique in that it can move in all directions, glide, hover, turn and accelerate quickly and even fly backwards. By replicating how dragonflies use their wings, the BionicOpter ends up being more versatile than a plane, helicopter or glider.

The robot has an aluminum body and carbon fiber wings. It has one external brushless motor and eight motors that handle the movement of its wings. Speaking of which, the robot can orient its wings vertically or horizontally as needed, just like the real deal. The BionicOpter can fly on its own but it can also be controlled remotely. All of that in a machine that weighs only 175g (approx. 0.39lbs.).

If you ask me the best feature of the BionicOpter is that it has a gracefulness to it that I previously thought could only be exhibited by a living creature. Check out Festo’s report (pdf file) if you want to learn more about the robot.