A company called Clearpath Robotics Inc. recently unveiled its bot of burden, the Grizzly. The four-wheeled robot can go faster and carry much more load than its most famous counterparts, Boston Dynamics’ BigDog and Alpha Dog. Plus the Grizzly looks a lot friendlier than those alien-like robo-dogs. 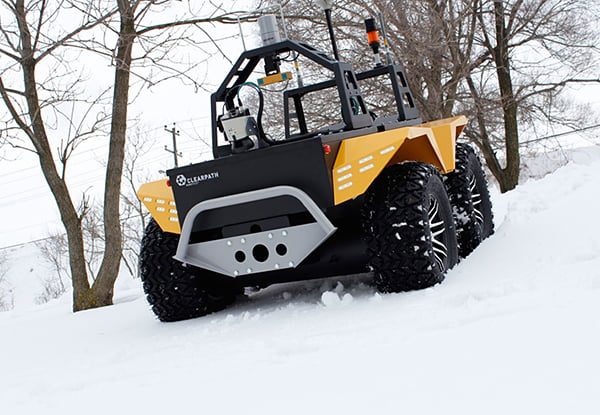 The Grizzly can carry up to 1320lbs. of cargo, although I’m not sure if that limit includes the modules that can be installed onto it. The robot can trudge along at up to 12mph for as long as 12 hours, thanks to its 80hp electric motor and two 200Ah batteries. To help it take on difficult terrain, the Grizzly comes standard with 26″ wheels, a bull-bar and a front axle with 16º of articulation. It also a clearance of 8″ to reduce the chance of getting stuck.

Then again, it may not be fair to compare DARPA’s dogs with the Grizzly. After all those ones are still in the prototype stage. Also to their credit they’ll probably be able to conquer more types of terrain because of their legs. But if you need a pack robot now, the Grizzly might be up to the task.