Get a Whiff of This: The Smell-O-Vision Television is a Reality

One of Google’s April Fools’ Day pranks was the launch of Google Nose, a search engine that would supposedly push your olfactory senses into hyperdrive. While you won’t be able to smell stuff on your computer display yet, you might soon be able to on your television screen. 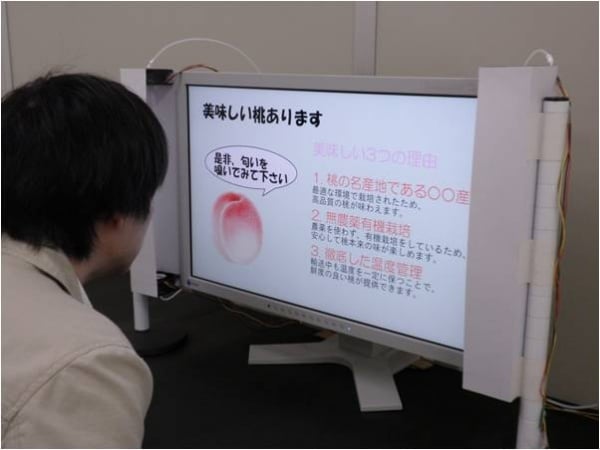 This is all thanks to researchers from Japan’s Tokyo University of Agriculture and Technology[JP]. They’ve developed a ‘smelling screen’ that makes smells waft from certain areas on the screen where the object that you’re supposed to smelling is located. So how are the smells produced? The secret lies with the four fans installed on each corner of the screen. Odors from gel pellets are bed into the streams in each corner, and they are then blown by the fans across the surface of the display.

The screen was demonstrated at the IEEE Virtual Reality conference last month, where the researchers explained: “The smelling screen is a new olfactory display that can generate a localized odor distribution on a two-dimensional display screen. The generated odor distribution is as if an odor source had been placed on the screen, and leads the user to perceive the odor as emanating from a specific region of the screen.”

They also added: “The user can freely move his/her head to sniff at various locations on the screen, and can experience realistic changes in the odour intensity with respect to the sniffing location.”

It might take more time before they’ll be made commercially, but the future of television is here – and it smells.

[via Daily Mail via C|NET]