A couple of months ago we saw the SteadyWheel, a very affordable camera accessory that can help you stabilize your shots. The MōVI is way more expensive than the SteadyWheel, but for what it can do – and the money, time and effort it could save – it seems like more bang for the filmmaker’s buck. 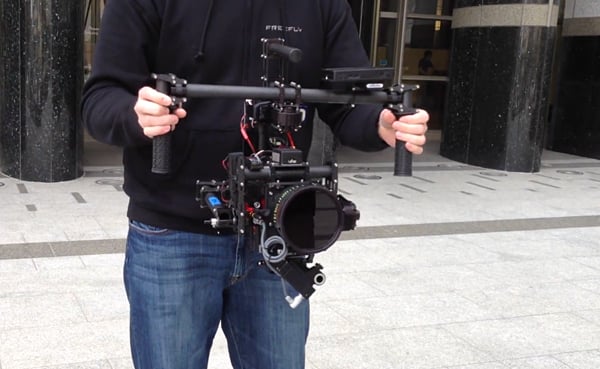 Made by Freefly, MōVI is a “digital 3-axis gyro-stabilized handheld camera gimbal.” It can be operated by one person or you can enlist another person to control the camera while you carry and move it about. Here’s a quick demo of the MōVI’s stabilization powers:

Mind not blown? Here’s what it can do:

Wow right? Once you don’t have to worry about keeping the camera stable I imagine it frees directors and cinematographers to think of a lot of different shots and angles. It helps that the MōVI only weighs about 4lbs. I’m pretty sure those of you who are into TV and filmmaking are scraping your brains off of your walls right now. Finally, here’s the final cut of the short film. It was directed by Vincent Laforet, and yes, every shot you’ll see was made with the MōVI.

Laforet said Freefly will release two models of the MōVI. The MōVI M10 will be the first one to be released. It will be priced at $15,000 (USD) and will have a 10lb. capacity. A smaller model called the M5 will follow for half the price. Later on, Freefly plans to release the big bad M20, which should be able to carry heavier cameras and accessories. I highly recommend you check out Laforet’s website for more details on the MōVI.