The Distance to Mars: Measured in Pixels

I’m pretty sure that many people have trouble understanding stellar distances. Even Mars, one of the closest planets, is really far away by Earthly measurement standards. Check out this great and simple web animation on how far away Mars actually is from Earth. 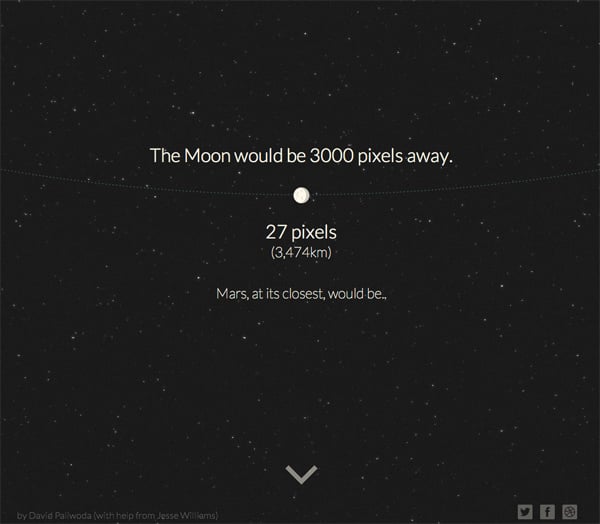 The Distance to Mars website was made by David Paliwoda and Jesse Williams, and it shows you just how far away Mars really is. Just click the down arrow on the website, and start your accelerated ride to the red planet, as measured in pixels.

There are plenty of different proposals for manned missions to Mars, but they face a lot of challenges, due to the vast distances involved. At the current level of technology, it would take astronauts about 150 days to travel to Mars one way. The date for a manned expedition hasn’t been confirmed, but there are a couple of windows when Mars would be at its closest to Earth. The nearest one is in the 2030s followed by one in the 2050s.