I think we can all agree that growing up, getting in a spit wad fight with someone was fun right up to the point where you got hit with a spit wad. After that, it’s really gross and you really just don’t want to play anymore. A new project has turned up on crowdfunding site Indiegogo that takes spit wad wars to the next level. 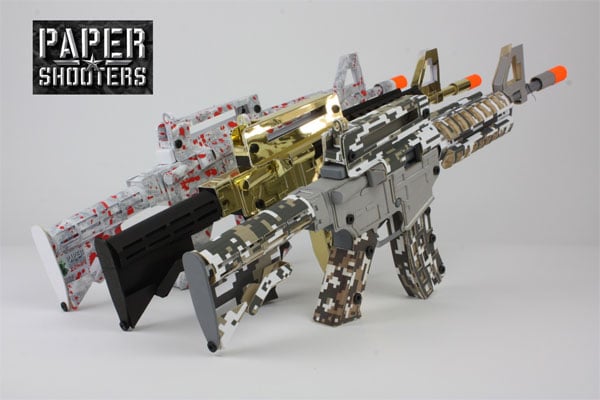 The project is called Paper Shooters and is for some cool cardboard assault rifles that are able to shoot paper ammunition up to 75 feet. These things remind me a bit of Airsoft guns, only they shoot what appears to be paper pellets. You can even create your own ammo according to the designers. The Paper Shooter comes as a kit made out a special cardboard that has been treated for durability. The kits also have a plastic skeleton and internal mechanism for durability.

A pledge of $45(USD) will get you your very own Digital Ops camo kit. For $65, you can get the blood-spattered Zombie Slayer or the blinged-out Golden Touch model, which has a shiny golden shell. For $185, you can pick up all three shooters, along with 150 pieces of ammo, and a zombie head target. Additional magazines are available for $10 each, and additional ammo sells for $8 for 50 paper wads.

Keep in mind that these are definitely not kid’s toys, and its creators say it is intended for users ages 14 and up only.