With so many Bluetooth speakers flooding the market, it’s getting harder and harder to decide which one to buy. Well, I’ve been test-driving one for the past few days that I definitely think should be in the running. The Braven BRV-1 is a compact, rugged-looking Bluetooth speaker that I definitely would consider keeping in my backpack from now on. 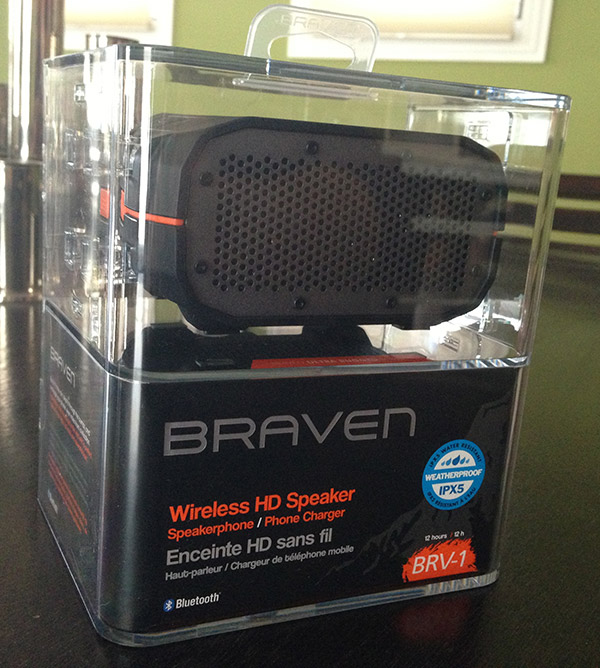 While it measures just 5″(w) x 3.25″ (d) x 2.5″ (h), and weighs just over 12 ounces, this compact speaker really does offers big sound in a small package. As I write this, I currently have it streaming tunes from my iPhone about 12 feet away, and it’s filling my 400 square-foot living room/office with sound.

The speaker is nicely designed, with a rubberized case which provides easy access to the volume controls (which also control tracks if you hold them down longer), power switch and a play/pause button which doubles as a pairing button for Bluetooth and for accepting and hanging up on calls. Its only metal bit is its speaker grille, which comes in either black or blue. 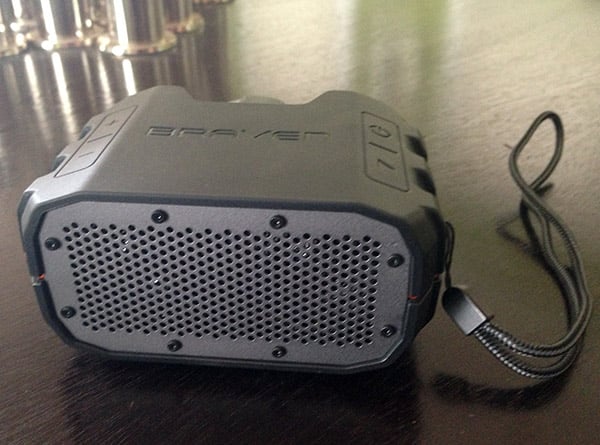 Braven packed the BRV-1 with two full-range speakers, and a passive subwoofer, powered by a total of 6 watts of class-D amplification. This gives it plenty of oomph, despite its size. In my playback experience, I found minimal distortion at even the highest volume levels, and a clean, ear pleasing sound with plenty of low-end for a box this small. Sure, its bass won’t substitute for a powered subwoofer, but it’s as good as many bookshelf systems I’ve used over the years.

In addition to its music playback chops, the BRV-1 functions as a speakerphone for your Bluetooth smartphone. I didn’t find audio quality to be particularly thrilling during calls, but that’s more likely a limitation of the phone networks than the speaker itself. I was also able to use it to control Siri with my phone sitting on the other side of the room. 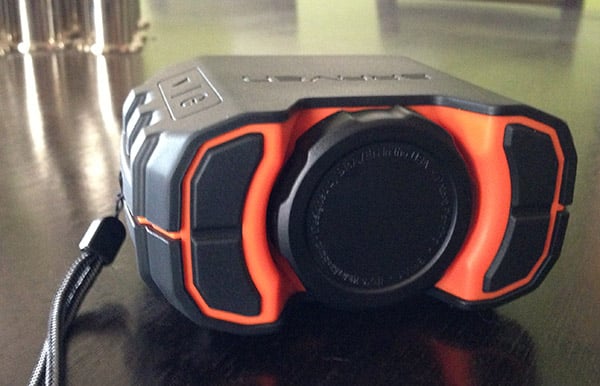 On the back of the BRV-1, you’ll find a twist-off protective cover which conceals access to its microUSB charging connector, a 3.5mm audio jack, and a full-size USB connector which can be used to syphon off some power to your other gadgets in a pinch. It won’t charge an iPad, but it’s more than fine for helping out your dying smartphone. Speaking of battery life, I was able to get slightly more than the quoted 12 hours of power from a single 3 hour charge. There’s also an on-demand battery indicator hidden beneath that cap so you can see about how much power you have left (in 20% increments). 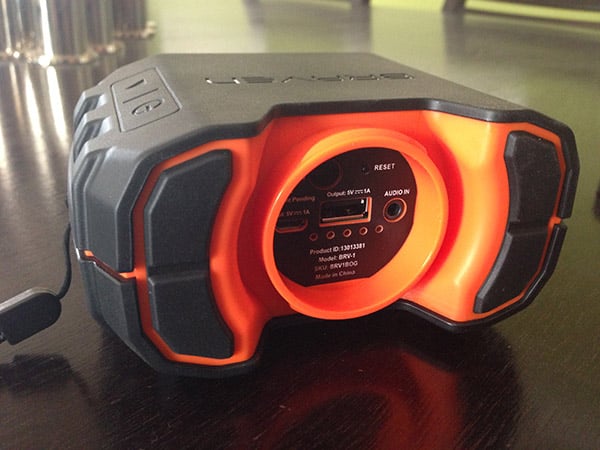 If you’re wondering about that twist-off cover, that’s because the BRV-1 is IPX5 rated water-resistant, and sealed well enough to take to the beach, poolside, or even in a rainstorm. That said, it’s not designed to be submerged, and despite its rugged looks and shock absorbent design, I wouldn’t intentionally toss it around more than you have to.

Overall, the BRV-1 is a very impressive little speaker, and it will be taking up residence in my travel bag. If I have any complaints at all, it’s that I’d prefer that it supported AirPlay in addition to Bluetooth, and that there was some sort of tether attaching the back cap so you don’t risk losing it. But those are minor issues, and the excellent sound quality, portability and rugged good looks are more than enough to win me over.

Disclosure: Braven provided the speaker for review in this article. However, all reviews are the unbiased views of our editorial staff, and we will only recommend products or services we have used personally, and believe will be good for our readers.