Do you want to play laser tag all the time? Please. Does a bear poop in the woods while dreaming of playing laser tag? Well now you can. A group of kids from the Young Tech Entrepreneur program of ThoughtSTEM have invented a small laser tag target. No need to wear the bulky body armor that doesn’t actually protect you from laser gunfire that isn’t really a laser but infrared! 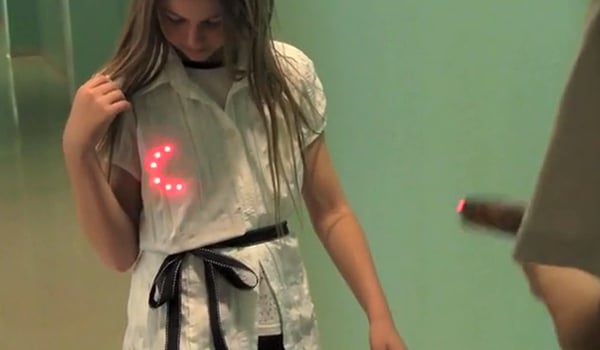 The yet unnamed gadget is controlled by an ATmega328 chip and has six LEDs that serve as the wearer’s hit points. Each LED goes from green to red each time the gadget is hit and is bright enough to shine through clothing. The current prototypes look rough, but with your help ThoughtSTEM can make the targets look more stylish. But what about the blasters? Well, you may already own a bunch of them. According to ThoughtSTEM anything that emits infrared light at 38 kHz can be used as a laser tag “gun”. That includes many TV remote controls. As you’ll see in the video below, cunning tinkerers can even make hidden infrared weapons or traps.

Pledge at least $75 (USD) on Kickstarter to reserve a fully assembled laser tag target. But if you’re good with electronics, pledging just $25 gets you the schematics and instructions to build the device. They really should come up with a name for it.