If you’re in the market for a new device to help keep your iPhone or other smartphone charged up and ready to use, the MonkeyOh is a cute and offbeat way to do this. The device looks like a monkey with a USB port in his mouth. It has little feet and hands that secure smartphones of varying sizes and holds them near your outlet. 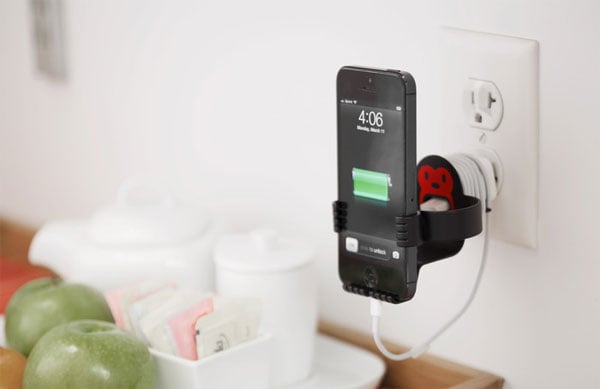 You can also wrap the excess charge cord that comes with your smartphone around the base of the holder near the outlet. The flexible monkey arms are designed to secure iPhones and other devices with or without cases. One of the best things about this smartphone holder and charger is that it sticks the phone out from the outlet far enough that you can use the second outlet for other needs. MonkeyOh also works as a phone stand in either landscape or portrait modes.

The MonkeyOh does require the use of the new generation small Apple power adapter. You can charge other smartphones as long as you have the Apple power adapter by simply plugging in your USB charging cable. MonkeyOh is on Kickstarter right now seeking the funds to come to market. A pledge of $15(USD) by April 18th will get you one of the first MonkeyOhs, with estimated shipping this July.