Android tablet fans will have a new tablet to choose from starting tomorrow when the Samsung Galaxy Note 8.0 tablet hits stores in the U.S. As the name suggests, the tablet has an eight-inch screen with a native resolution of 1280 x 800. The tablet runs the Android 4.1 (Jelly Bean) operating system. 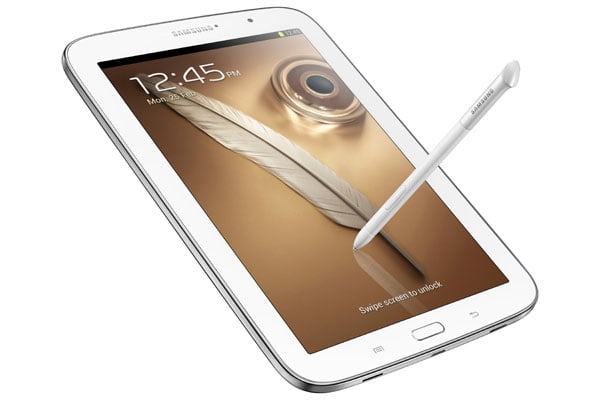 The Galaxy Note 8.0 uses a 1.6 GHz Samsung Exynos Quad-core processor and has 2 GB of RAM. The tablet comes with 16GB of internal storage and a microSD card slot for up to 64GB of additional storage. The tablet also has integrated dual-band 802.11/b/g/n Wi-Fi and a 4600 mAh battery. It’s also got a Wacom-based digitizer screen with Samsung’s S-Pen pressure-sensitive stylus.

Other hardware features for the little tablet include a five-megapixel rear camera that can record full HD resolution video and a 1.3-megapixel front camera. The tablet also comes 50 GB of free Dropbox storage good for two years from the date of purchase. The Wi-Fi only Galaxy Note 8.0 will sell for $399.99(USD). Unfortunately, there’s no word on pricing or a release date for an LTE version in the U.S.

Engadget and The Verge both have posted early reviews, with decidedly mixed feelings about the little tablet.