Back in 1971, the Soviet Union sent a spacecraft to Mars. The spacecraft was called the Mars 3 Lander and it touched down on the surface of the red planet and continued transmitting for several seconds on December 2, 1971. It was the first spacecraft to successfully land on Mars and survive long enough to transmit any data. The newer NASA Mars Reconnaissance Orbiter snapped a photograph about five years ago that has recently come to light. 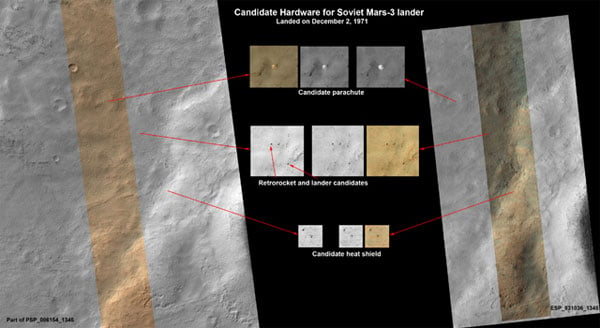 Space enthusiasts from Russia have discovered four separate features in a five-year old image taken by the NASA spacecraft that resemble four pieces of hardware from the Mars 3 mission. The objects spied in the photograph are believed to be the Mars 3 parachute, heat shield, terminal retrorocket, and lander itself. NASA also took a followup picture last month that shows the same features. 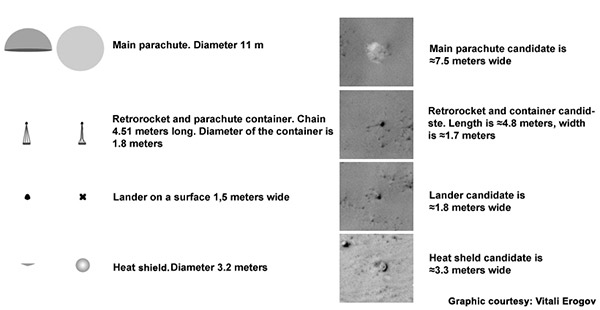 The Soviet Union had previously launched the Mars 2 lander, but that lander crashed. They knew that the Mars 3 spacecraft had landed on the surface of Mars, but the spacecraft stop transmitting 14.5 seconds after it touched down for unknown reasons. The Soviet Union predicted landing site to be at latitude 45-degrees south by longitude 202-degrees east in the Ptolemaeus Crater.

The image the MRO took is massive with 1.8 billion pixels of data. That means the gigantic image would need about 2500 standard computer screens to view the entire shot at full resolution. You can view the image here – without 2500 computer screens.

“Together, this set of features and their layout on the ground provide a remarkable match to what is expected from the Mars 3 landing, but alternative explanations for the features cannot be ruled out,” said HiRISE Principal Investigator Alfred McEwen of the University of Arizona, Tucson. “Further analysis of the data and future images to better understand the three-dimensional shapes may help to confirm this interpretation.”