2013 Cadillac ATS Loaded with Tech (Not Your Daddy’s Caddy)

Cadillac has long been a brand associated with luxury and sophistication, but it was also long thought of as the car your father – or your grandfather – might drive. Well I’m here to tell you that has definitely changed. I recently had the opportunity to put the 2013 Cadillac ATS to the test for a full week, and not only is it an excellent vehicle, it can be packed with all of the high-tech goodies that gadget geeks like you and I want in a car. 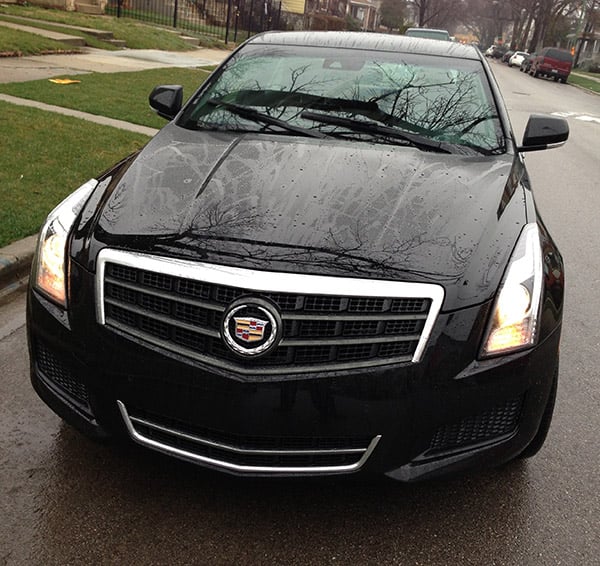 I won’t spend too much time talking about the car’s performance and styling – my focus will be on the technology inside the ATS. However, I will tell you that the ATS is one good looking car, with modern and agressive body styling, and a comfortable and luxurious interior. The all-wheel-drive, direct-injected 2.0L turbo model that I drove had plenty of punch (272 horses and 260 lb.-ft. of torque to be exact), while maintaining a consistent 25 MPG fuel economy combined across highway and city driving. The car handled like a dream – especially when I put it into “Sport” mode, which tightens up the steering and suspension so you feel in control of every move. It’s this incredibly solid handling along with a punchy little engine that makes this truly a driver’s car. Despite its zippy and sporty performance, it offered an exceptionally quiet ride. 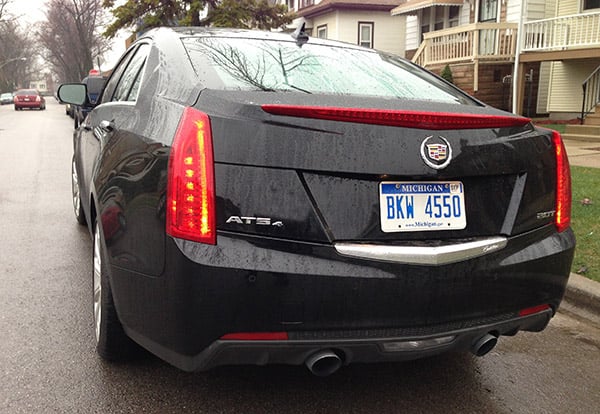 The model I tested was loaded with tech features, with Cadillac’s vaunted CUE (Cadillac User Experience) system at the center of it all. This provides a centralized control panel for audio, navigation, climate, and other vehicle preferences. The system uses a pair of displays – a 8-inch multitouch display that’s the main controller, and a small 5.7-inch display that’s located in the instrument panel behind the steering wheel. Sound for the system is provided by a powerful Bose surround sound system. 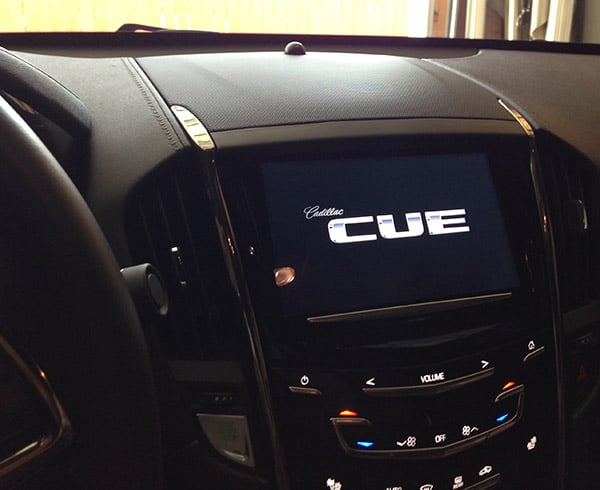 In addition to the touchscreen, there are a number of touch-sensitive chromed “buttons” beneath the main display, providing quick access to power, volume, climate, and CUE’s Home screen. While neither the chromed buttons nor the touchscreen provide the physical “click” that you might find in traditional controls, CUE includes a haptic feedback which provides a gentle “thump” sensation to confirm your finger presses. 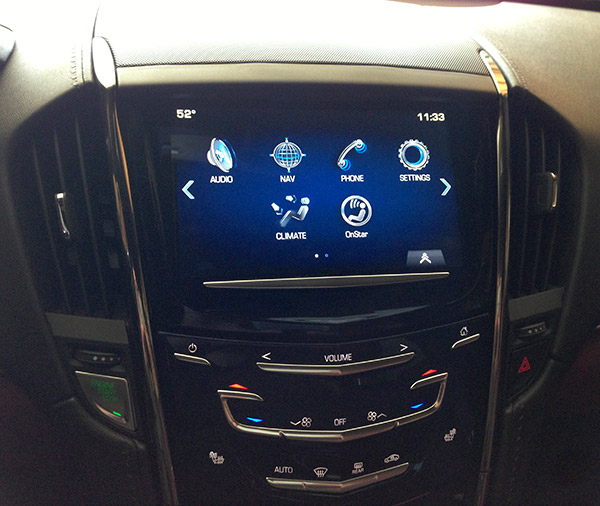 CUE itself provides a very clean and simple interface which should be familiar to anyone who uses a tablet or a smartphone. Its Home screen offers icons for Audio, Navigation, Phone, Settings, Climate, and OnStar. While there is room on the Home screen for a couple more icons, GM was smart to place a couple of icons on a second page for Pandora and Weather apps, so you get used to the swipe gesture to change pages. You can always drag and drop the icons around if you want to reconfigure them.

The arrow icon at the bottom right of the screen pops up a handy list of your favorite audio presets, which can be from any of the different sources, including Sirius/XM, AM, or FM. You can also pull up on this bottom menu to access more than five presets at a time. The CUE touchscreen also has proximity sensors, which turn on the menus at the top and bottom of the screen only when your hand is nearby. When you move your hand away, the screen displays only the most relevant information, greatly simplifying the displayed information. 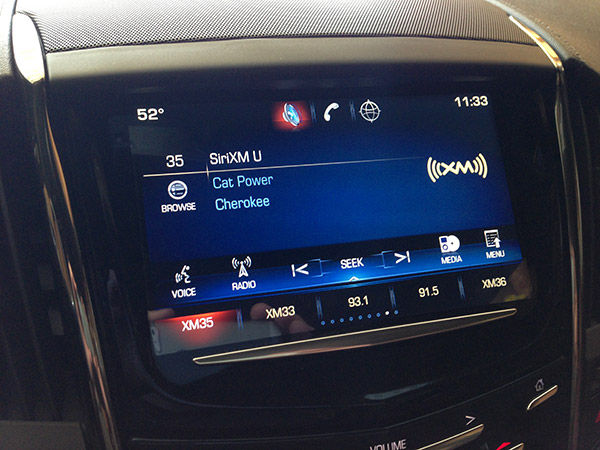 One of my favorite features in Audio mode is the “Browse” screen. This lets you quickly swipe through the list of hundreds of radio stations, and tap directly to the one you’d like – just like using the Contacts list on a smartphone. 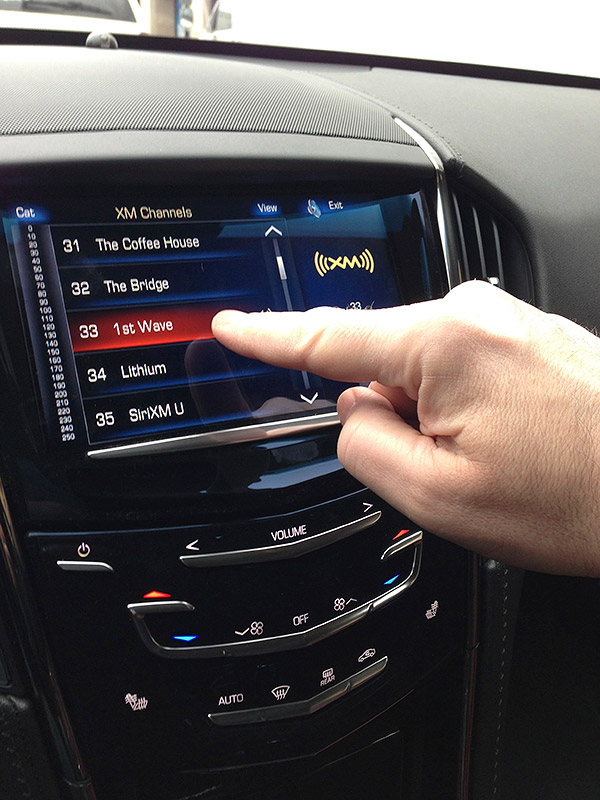 CUE also offers all of the requisite tech features you’d expect in a modern vehicle, including voice-based turn-by-turn GPS navigation, and Bluetooth integrated hands-free calling. Both of these features worked effortlessly for me in my tests, but being such utilitarian features, didn’t really surprise me in any way. It also offers “Natural Voice Recognition” for hands-free operation, which definitely is more intuitive than having to remember things like whether to say “Call” or “Dial” on other voice-based systems.

I mentioned before that CUE also offers Pandora support, and it provides a truly integrated experience, with album art, thumbs-up/down, bookmarking, and direct access to all of your mixes. Keep in mind that this only works over Bluetooth with Android and Blackberry devices, and iOS users will need to plug into the USB port in order to take advantage of the Pandora app. 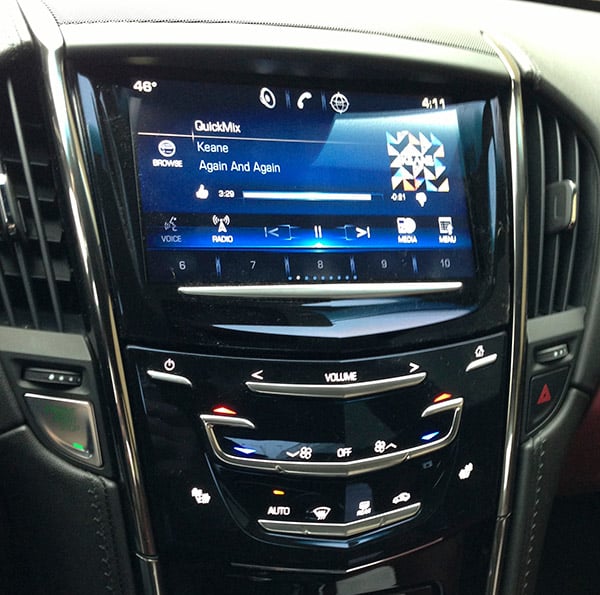 There’s also a Weather app which provides quick access to current and forecast information, and Cadillac is expecting more applications down the road, after it announced an app developer program and SDK back at CES this past January. 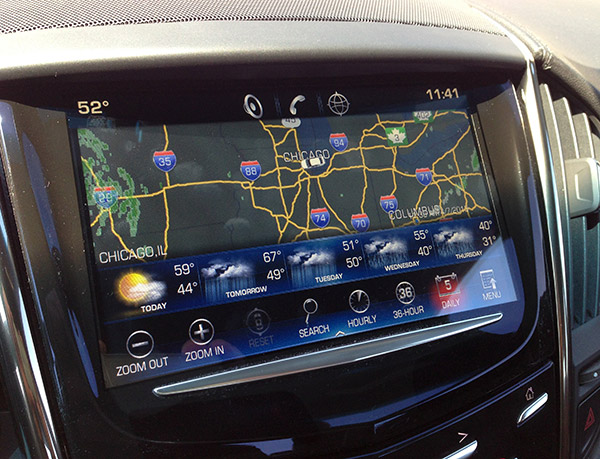 I will say that it took a little getting used to the touch-only CUE interface, but once you realize that you can use standard gestures like swipe and pinch-zoom (which is really handy on the nav interface), it’s quite a nice setup. That said, I would still like to have physical buttons below the CUE display instead of the touch sensitive metal ones. I’d also like to see hard buttons for the major functions like Audio, Nav and Phone so I could quickly change between these without taking my eyes off the road. One other thing to note is that both the screen of the CUE and the glossy surfaces in the center console of the ATS are major fingerprint and dust magnets. Fortunately, Cadillac was kind enough to include a little gift in the glove box… 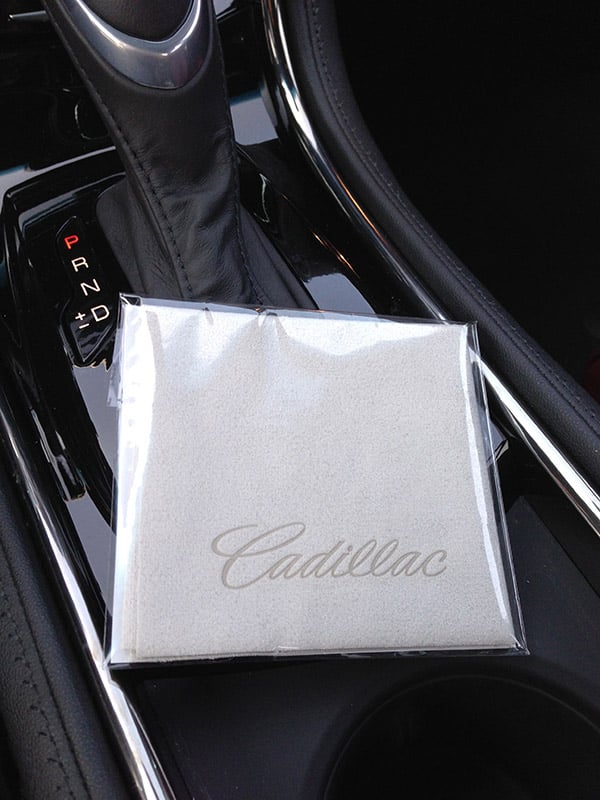 In addition to the touchscreen, CUE offers a set of handy steering wheel controls which quick access to many functions, including volume, track and even access to settings directly in front of you on the 5.7-inch widescreen dashboard display. You can even use the joystick-style controller on the right side of the steering wheel to customize what information is shown on the dash, such as a compass, fuel range, MPG info, or even a trip timer. 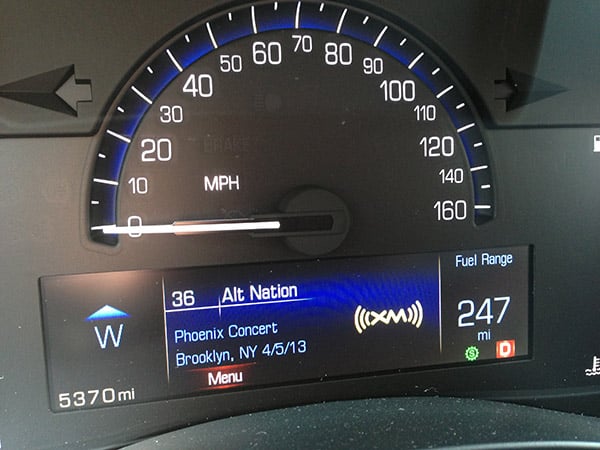 Another whiz-bang feature in the ATS I drove is the Forward Collision Alert system. This automatically can detect if you’re in imminent danger of rear-ending a vehicle in front of you, flashing a bright red LED heads-up indicator on the windshield, while simultaneously vibrating the driver’s seat.

This is part of the optional Driver Awareness Package which uses the same vibration feedback to alert you if you should stray from your lane while driving, or if you’re getting too close to an object while parking. The seat is pretty nifty tech, because it actually vibrates in different locations depending on if its a general alert, or if the hazard is to the left or right. This is a much better – and less annoying – feedback mechanism than I’ve seen in other vehicular warning systems. Plus, it’s like a free butt massage when it triggers, so how can that be bad? 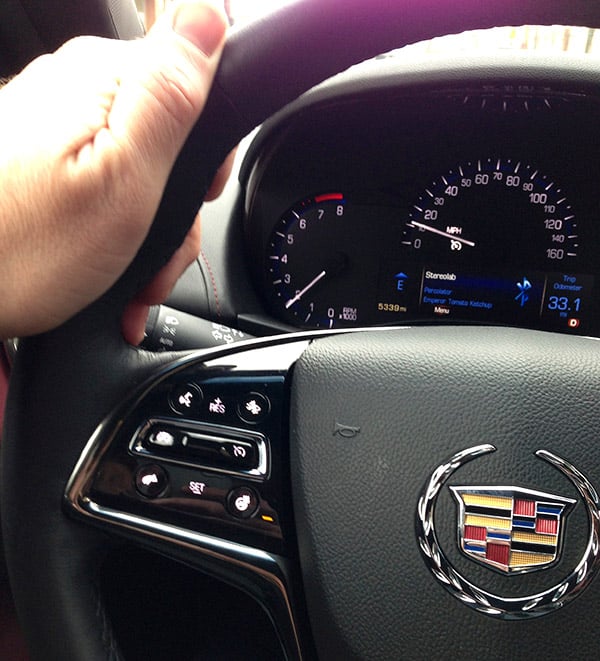 My car also came equipped with two features which are great to have if you live in a cold place like here in Chicago. Both passenger and driver’s seats came with three-level heating, but perhaps my favorite little surprise feature was the heated steering wheel. Yes. See that button next to the orange light on the steering wheel above? Just press it, and your cold hands will be in heaven in under a minute. Not that it’s a rational thought at all, but I think the government should make this mandatory equipment on all cars that drive in temperatures below 40 degrees. 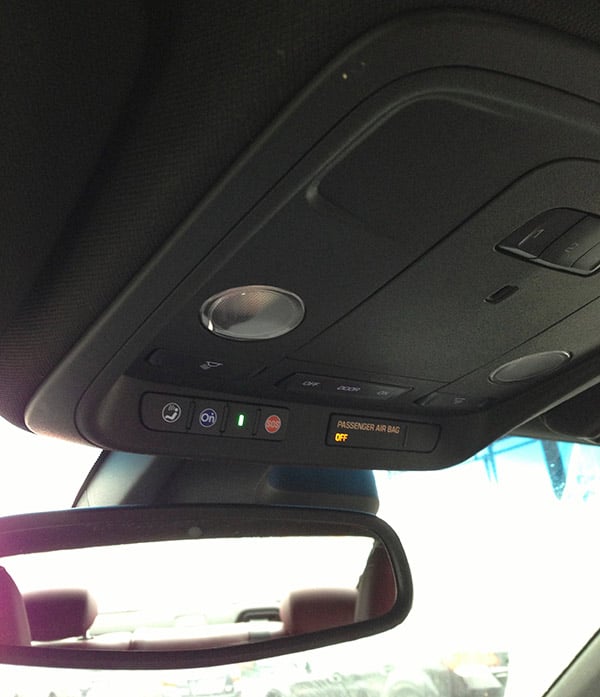 Technophiles looking to fully outfit the ATS can also opt for Adaptive Cruise Control – which maintains a pre-set distance between you and other drivers, a configurable Heads-Up full color display, and even Adaptive Forward Lighting, which swivels the cars headlights to cast their beams in the precise direction of your steering. Cadillac also offers optional LED accent lighting on the front of the car, and LED interior accent lighting is standard. 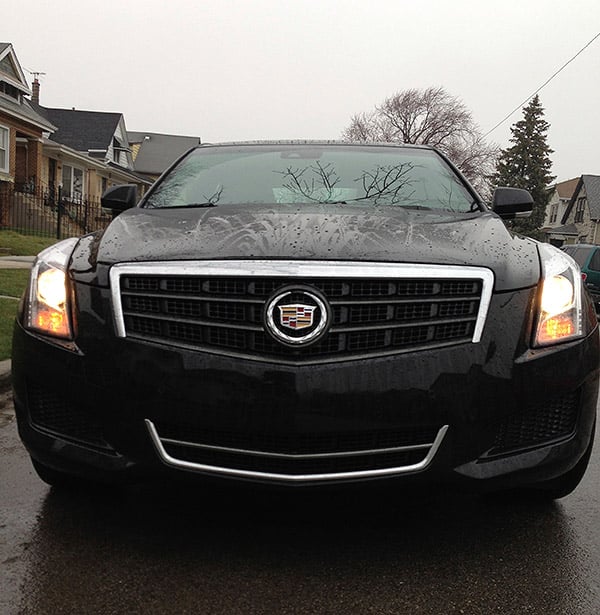 Overall, the 2013 Cadillac ATS is quite a desirable vehicle. It’s luxurious, comfortable, sporty and packed with technology (especially when fully-outfitted), and a car that I would be happy to be seen driving down the road. The CUE system does offer some innovations when compared to other technology packages, and it’s only in its first generation. Since Cadillac is promising that the system is software-upgradeable, I can imagine that CUE will only improve over time.

Disclosure: Cadillac provided the loan of the car for review in this article. However, all reviews are the unbiased views of our editorial staff, and we will only recommend products or services we have used personally, and believe will be good for our readers.