Electronic Girlfriend Coat Hugs You When Nobody Else Will

This interactive, electronic coat called the Riajyuu isn’t the first time people have attempted to give clothes that all-too-literal human factor. Remember the Like-a-Hug jacket which gave the wearer a good old squeeze every time someone ‘liked’ his or her posts on Facebook?

It’s all well and good until people stop ‘liking’ your stuff and you’re back to begging for hugs from willing strangers. I kid, but what makes the electronic girlfriend coat different is that you don’t have to do anything to earn hugs except wear it. 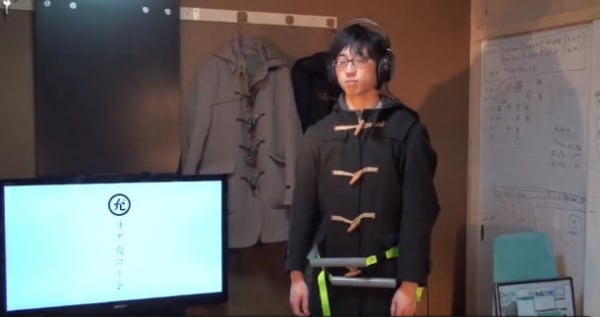 The Riajyuu Coat was created by students from the University of Tsukuba. It’s more than just a jacket that hugs you, since it has also been programmed to whisper sweet nothings to you as you wear it.

The coat comes with a belt around its mid-section, which tightens to simulate the hug. As for the whispering part, it comes with a pair of headphones that lets its wearer listen to a high-pitch voiced woman talking and apologizing for being late – just like a real girlfriend might. Obviously a real girl does more than just hug and whisper, but keep in mind that coats do have their limitations.

Hardware engineer Hikaru Sugiura explains: “The concept of this device is everyone can get the feeling of having a girlfriend.” It’s an interesting concept, but I don’t think a coat can ever take the place of a real live girl. I think that much is obvious.