Predator Kills the Star Wars Universe, Gets a Cool Trophy of Fett’s Head as Its Prize

You take the bounty hunters from Star Wars and you take Predator and you put them together in the same room. The result is geek magic. This is an amazing piece of art that I would love to own. Hell, I would love to see this crossover in the theater. 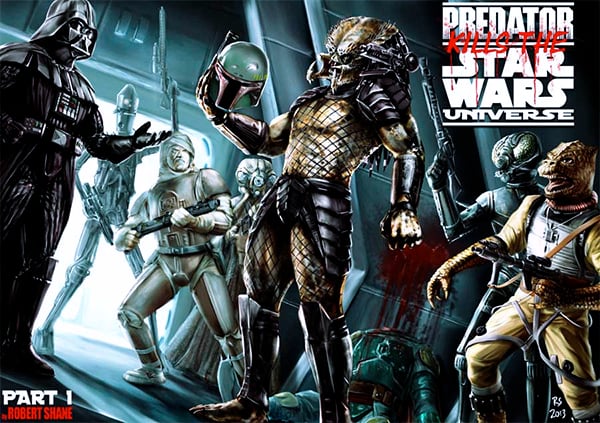 This image is part one of a series by Rhymesyndicate. Vader has assembled the bounty hunters. He’s probably giving them a stern talking to, when suddenly a Predator decloaks.(I’m guessing that’s what went down before this scene.) A split second later Boba Fett is missing his head and the Predator has himself a sweet trophy.

The tagline “Predator kills the Star Wars universe” is a play on words from Marvel comics’ “Punisher kills the Marvel universe”. Funny thing is that Vader doesn’t even look all that pissed. He’s just like, “WTF?… I’m working here!”