A huge number of gamers all around the world live on a steady diet of digital kills, pizza, and caffeine. The problem for a lot of gamers comes when you’re right in the middle of a heated match, you’re hungry, and you don’t want call and talk to the people at the pizza place to order your favorite pie. This is where Pizza Hut comes in with its new Xbox 360 app that allows you to order your favorite menu items from the convenience of your game console. 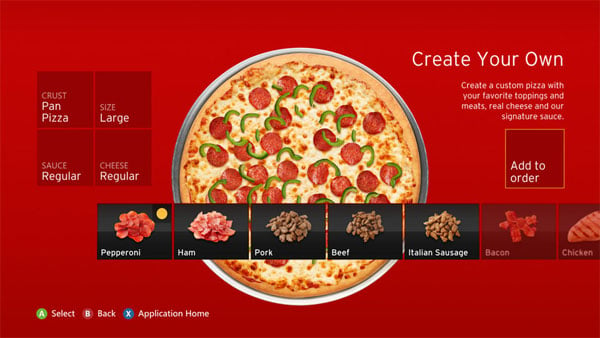 You don’t even need to get out of your favorite chair to order pizza, just launch the app and you can build your own custom pizza using your Xbox 360 controller, Kinect gestures, or voice commands. The app makes the entire menu from Pizza Hut available – from breadsticks to pasta and everything in between. Users of the app can also link their Xbox Live and PizzaHut.com accounts to save order settings to make future purchases even quicker.

Linking those accounts also allows you to take advantage of local deals that are available when you order. As far as I know, this is the first app that allows players to purchase physical goods from their console. The app is available to download as of today and if you place your first order using the app by May 6, you can get 15% off the entire purchase.