I love a good art exhibit as much as the next guy, but sometimes it can get a little boring just staring at all the static paintings on the walls – never mind the humiliation of getting chastised by the museum security for standing to close to them, like what happened to me a MoMA a couple of months back. 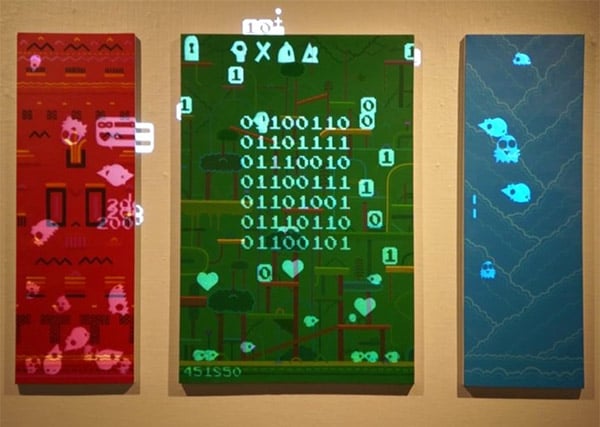 These unique paintings not only are more visually stimulating than most, but are interactive. Created by Brent Watanabe, For(){}; is an installation of paintings which let you play video games on them.

The acrylic paintings simply serve as projection surfaces for the retro-style games, while passersby can play a quirky, custom video game using an old-school NES controller. Brent used Flash and the Box2D physics engine to create the game. The gameplay is described as follows:

“There is no beginning or end to the game, just collecting and wandering, birthing and consuming, an arbitrary point system rising until your inevitable death and the birth of another generation. It is a game mechanism without the game. An addictive but essentially aimless experience.”

I don’t know about you, but I’d spend a lot more time at art galleries and museums if this was the kind of stuff hanging on the walls.