Red Dead Revolver‘s dueling mode was one of the game’s unique features. It attempted to emulate the feeling of tension by making the player go through a timing-based mini game. But what if you could actually go through the motions of a duel itself? Wouldn’t that be more exciting and fun to play? That’s the idea behind Quick Draw, a multiplayer game that uses the much maligned PlayStation Move controller. 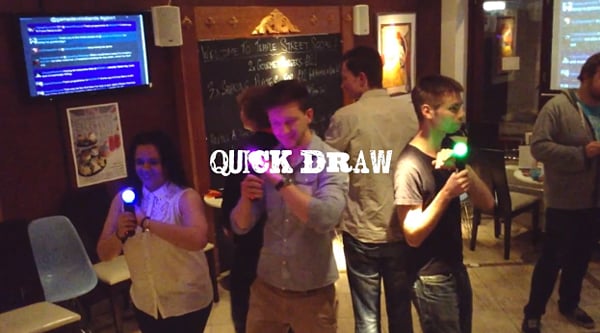 Quick Draw is currently being developed by Greenfly Studios. Greenfly’s Stephen Morris described the mechanics and history of Quick Draw at The Penny-Arcade Report. Unlike most videogames, Quick Draw doesn’t have you look at a monitor and control an avatar. Instead, you just use your body and the Move controller to target other players, which ideally makes it a fun party game. Quick Draw has three modes, but the goal in all of them is simple: be the one with the fastest trigger finger. As you’ll see in the video below, the winner is the one whose PS Move doesn’t glow red after the shootout.

Gotta love the sound effects! Greenfly Studios is working on releasing Quick Draw not just for the PlayStation but for PC and Mac as well. I wonder if Quick Draw can also include a two-player game mode where you gather a bunch of PS Move controllers in the middle of the floor, then at the count of three both opponents scramble to get a controller and shoot at each other. But the catch is that only one of the controllers has a “bullet” in it, so the players have to keep scrambling for the loaded controller, like a scene from a comedy action movie.

[via Greenfly Studios via The Penny-Arcade Report]