Earlier this year Microsoft introduced IllumiRoom, a prototype technology that augments TVs and other displays by projecting room-filling visuals that complement what is being shown on the screen. Microsoft Research recently released a video that explains the basics of IllumiRoom. 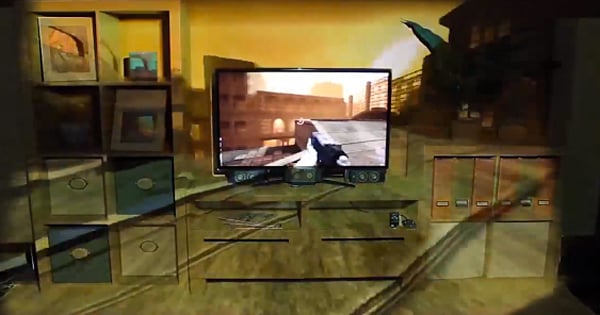 IllumiRoom can augment your gaming sessions in a number of ways. The most obvious and impressive way is to extend what’s being shown on your TV into the area around it. The resulting effect is halfway between a 3D headset and a cinema. But this is also the most difficult feature to implement because it will require “access to the game’s source code.” Other features of the IllumiRoom include adding spatial cues or matching mood lighting to enhance immersion.

Movies can also be extended using the IllumiRoom, but again the movie would have to be made with this function in mind. In other words, every scene has to be shot in a wide field of view in addition to the usual shots.

As mentioned in the video, the current proof-of-concept prototype uses a Kinect to analyze the color and geometry of the area around the TV and an off-the-shelf projector to display the complementary visuals. But as Microsoft’s researchers imply in their paper (pdf), the goal is to pack all the necessary hardware into one device. This IllumiRoom-capable device will then be “connected wirelessly to a next generation gaming console as a secondary display.” I wonder if we’ll hear more about it on May 21.