Soft-bodied Robot Snakes Are the Future of Robo-snakes

We have seen plenty of robot snakes before. Sometimes they climb trees, or slither in the grass, maybe take a swim in the pool. I’m always on the lookout for them, since I know they will strangle me if they catch me off guard. But now things are just getting crazy. Soft snakes are coming! This shiz just got real! 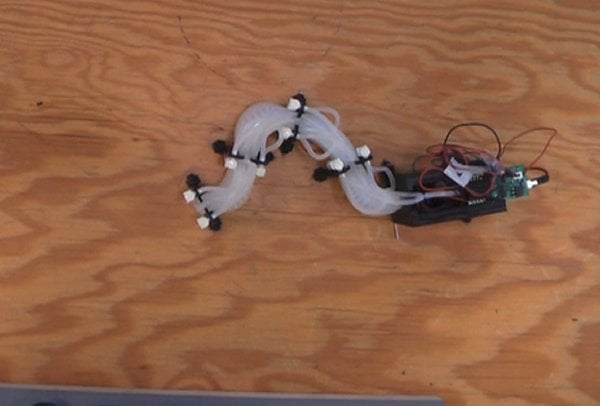 This prototype is powered by air and can attain amazing speeds up to 19 millimeters per second. It’s muscles are tiny tubes made from soft polymers that line the snake’s four segments. The on-board computer in the tail controls a compressor that changes air pressure in the elastomer tubes, mimicking a snake’s movement.

So when air passes through the body, it creates a wave. Valves at the joints open and close to make it undulate. Yeah, stuff just got wayyyy more creepy. I look forward to it’s soft skin around my neck as it squeezes. The upside is that the softer the skin, the easier it is to slice with a knife. How do you like that soft snake?