A couple of years ago we saw a concept for a diabolical alarm clock. The idea was that a desperate late sleeper would willingly place a banknote on the clock, knowing that the clock will shred the money if he doesn’t wake up when the alarm goes off. And now the concept has been turned into reality, by a tinkerer named – I am not making this up – Rich Olson. 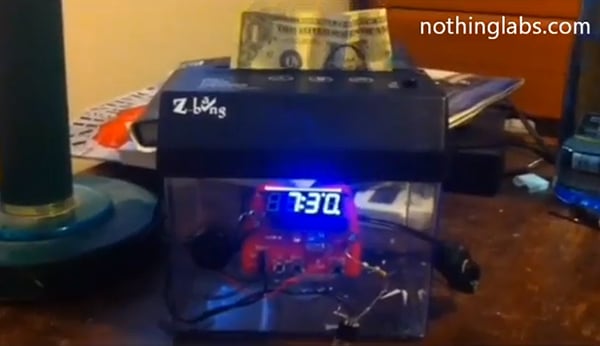 Rich made the clock using a SparkFun ClockIt and a USB-powered paper shredder. Rich is quite merciless too – the clock waits less than 10 seconds after the preset time before it starts shredding your money:

Note that destroying money is illegal in many countries. So if you’re going to make your own shredding alarm clock, why not tape your pinky finger to it instead? That’ll be way more effective at waking you up. Just kidding.