If you and your indolent ass ever wished that there was a gadget that could insert your Xbox 360’s discs for you, this contraption is not the answer. Not only because it’s not really practical, but because you’ll never be able to build it in the first place. 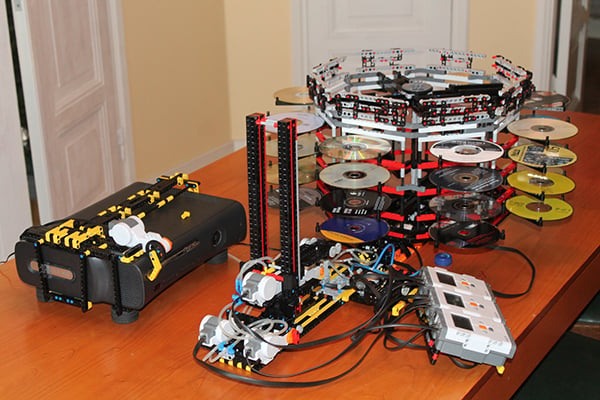 This impressive, but silly disc changer system was made by a mad genius who calls himself Zwenkka. He made it out of about 3,000 parts, including three LEGO Mindstorms NXT micro-computers, seven NXT servos, an R/C motor and a light sensor. The system is operated via a mobile app. Zwenkka selects a disc by entering a number between 1 and 32 (because the tray holds 32 discs). His phone relays the selected disc via Bluetooth and the robot does the rest – slowly. It takes 42 seconds to change a disc.

I wonder how it remembers the location of the open slot on the tray when it has to return a disc. I also wonder if it can be tweaked so it delivers food to one’s mouth instead. Head to Palikkatakomo for more on the Xbox 360 disc changer.