Sherpa 50 Solar Charger Keeps Your Gadgets Powered up, away from the Outlet

If you’re on the go a lot, away from a power outlet you may have tried all sorts of things to help get more run time from your gadgets. A new solar power kit has turned up and features a small portable battery that can be recharged from the sun or a wall outlet. The charging kit is called the Sherpa 50. 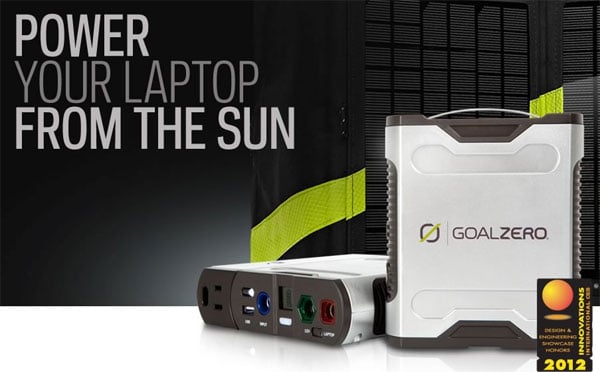 The first time the Sherpa 50 turned up was during CES 2012 and it was delayed over a year and a half coming to the market. The good news is that it is here now and for $399.95(USD) you can get the complete kit including an AC inverter and a portable battery. The device can also be purchased a la carte – without the AC outlet or the solar panel, for as little as $199.95.

In addition to the standard AC outlet, the device also has a USB port for charging devices and a special port for your laptop. The battery weighs less than a bottle of water according to the manufacturer and can give you one full recharge for most laptops, and multiple recharges for other gadgets.

The battery can be charged completely in about five hours using only the included solar panel. You can also recharge the battery from the wall outlet in about three hours.

The Sherpa 50 is available now from GoalZero.