If you are a fan of the Awe Me channel, then you already know that for their series Man at Arms, master swordsmith and renowned propmaster, Tony Swatton, forges cool weapons and then takes them into the field to try them out. This week, Tony has created yet another epic weapon – Worf’s Klingon Bat’leth. 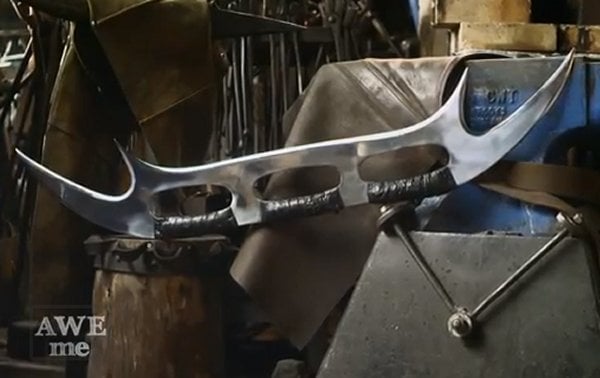 He had gotten his hands on a cheap Chinese copy of a Klingon Bat’Leth, but he wasn’t happy with it, so he decided to make his own. And it isn’t as simple as cutting a piece of metal into shape and then swinging it at your enemies. This weapon was so sharp that Tony says it “almost cut his head off.” So he put on a chainmail cowl, a welding jacket and a leather apron to protect himself while working with it. Check out the build in the video clip below, and be sure to wait around until about 3:44 in to see it in action.

In the end, it is a thing of beauty and deadly sharp. It’s definitely not a toy. This thing will slice and dice you whether a Klingon is wielding it or not.