Most of the replicas I’ve seen are of robots, vehicles and weapons. The inspiration behind Darius Bode’s creations is a lot humbler than that. But it’s one that is quite intriguing when you see it in action: a trash compactor. To be more specific, Bode made a working replica of the Schörling 2R rearloader. 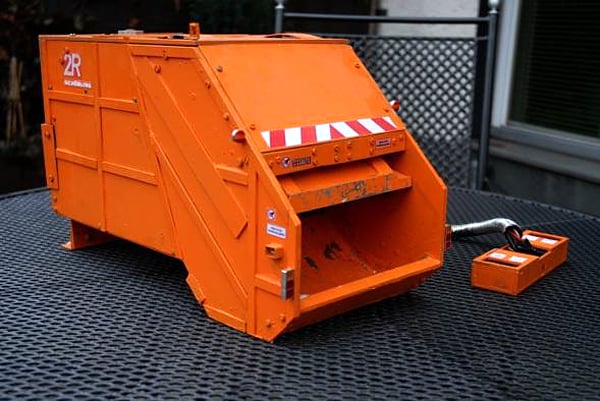 In his making-of article (pdf), Bode confesses that he’s been fascinated by the compactor since he was a kid: “I think there is some kind of magic about this packer because it moves so stolidly (sic) and calm no matter what you throw in there.” He started with cardboard models of the compactor, but in 2009 he finally decided to make one that works just like the original. He ended up making a 1:11 scale replica using aluminum and steel. It takes its time, but the tiny compactor actually works. The video below shows it taking on some aluminum cans.

Aaaand we just spent a few minutes looking at a miniature trash compactor crush some cans which we could have just as easily crushed with our hands (or heads.) Thanks Internet! There’s more where that came from. Check out Bode’s YouTube channel for additional videos of the replica.

[via Darius Bode (pdf) via Classic Refuse Trucks via Doobybrain]