How fitting is it that a high school student may have found the answer to longer lasting and faster charging mobile devices? The promising invention was made by Eesha Khare, an 18-year old student from Saratoga, California. It’s a supercapacitor that, according to Intel, “fits inside cell phone batteries, allowing them to fully charge within 20-30 seconds.” 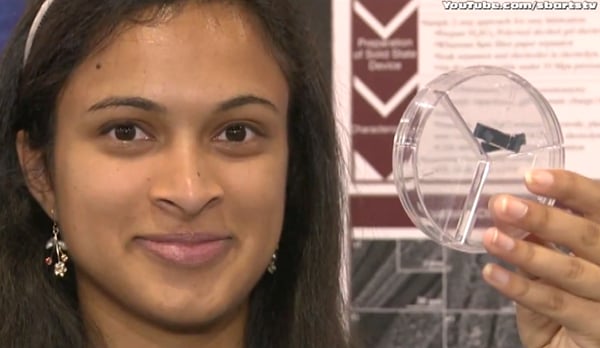 Supercapacitors have significantly higher durability and rate of charging (and discharging) compared to rechargeable batteries, but the downside to them is that they have a low energy density. That’s why they’re mainly used in devices that need short bursts of power. But in the video below, which was uploaded by Santa Barbara Arts TV on YouTube, you’ll hear Khare mention that her supercapacitors have “a special nanostructure, which allows for a lot [sic] greater energy per unit volume.”

For her invention, Khare won $50,000 (USD) and was awarded one of the runners-up honors at the 2013 Intel International Science and Engineering Fair. The first place went to a 19-year old who developed an AI for a low-cost self-driving car. But Khare bags the top prize in my book. Not that it’s worth anything. My book doesn’t even actually exist.