Xbox One Specs and Features Announced, Price and Release Date to Come

Today, Microsoft took wraps off of their shiny new gaming console, the Xbox One (formerly known as Xbox 720 or Durango.) If you can believe it, it’s been nearly eight years since the original Xbox 360 came out – the same year YouTube launched, and almost two years before the iPhone came out. Just think about how much technology has progressed in that time. So it’s about time Microsoft released a new gaming console. 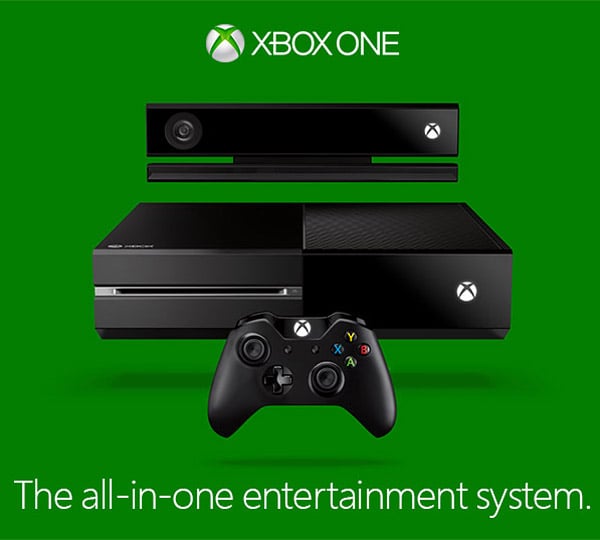 Hellbent on becoming the main entertainment hub for your living room, the new console won’t just be about gaming. In fact, Microsoft wants to provide a singular device which can function as an all-in-one television, gaming and entertainment platform. While the hardware itself seems impressive, Microsoft’s announcement was focused on content – especially the television experience. 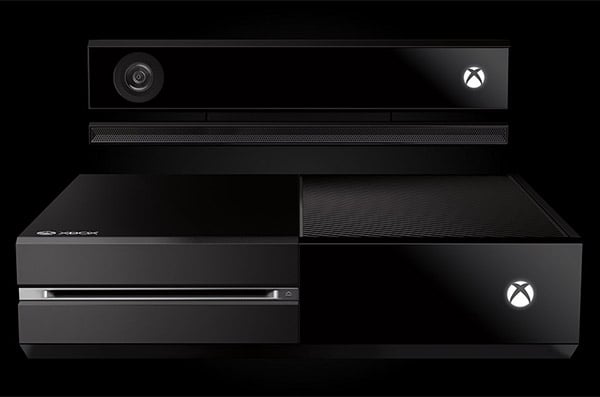 The Xbox One console is actually a fairly non-descript, but modern black box which looks like it will fit nicely into any home entertainment center, with a single slot-loading disc loading tray in the front. 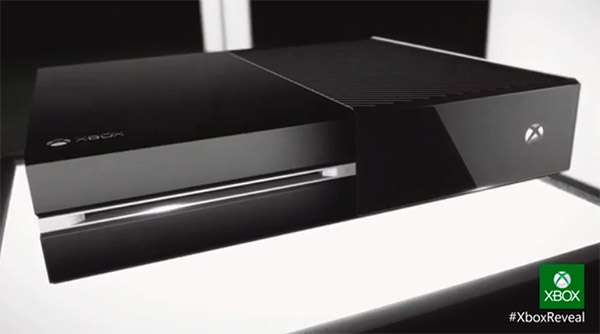 Under the hood, the Xbox One has a 8-core x86 CPU (of unspecified make and manufacturer) and a total of 5 billion transistors, 8GB system memory, a Blu-ray drive, 802.11n wireless with Wi-Fi direct, USB 3.0 and HDMI In and Out. Under the hood is a new console architecture which combines three core subsystems: Xbox, Windows and an integration and interaction layer. Microsoft didn’t specify any details on the GPU yet. 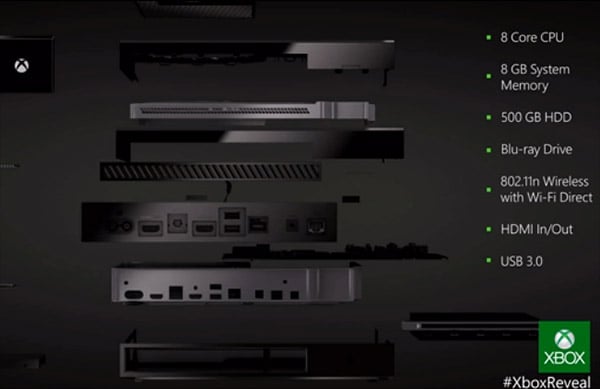 Xbox One will come packaged with a new Kinect sensor, with a 1080p HD 30 FPS RGB camera, upgraded microphone arrays, and “Time of Flight” technology capable of processing 2GB of data per second.

The new Kinect sensor can detect the most subtle of movements, such as turning your wrists and even being able to read your heartbeat while exercising. 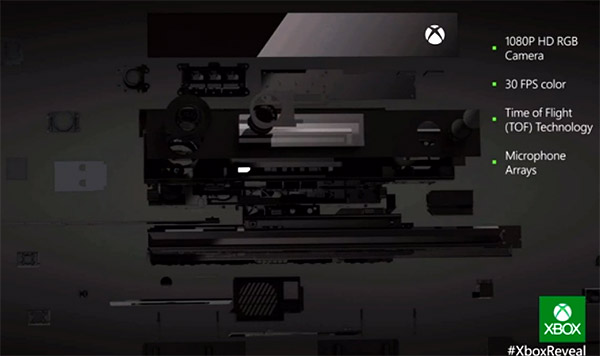 Since Microsoft currently has what is arguably the best controller on the market, they didn’t want to dramatically redesign it. 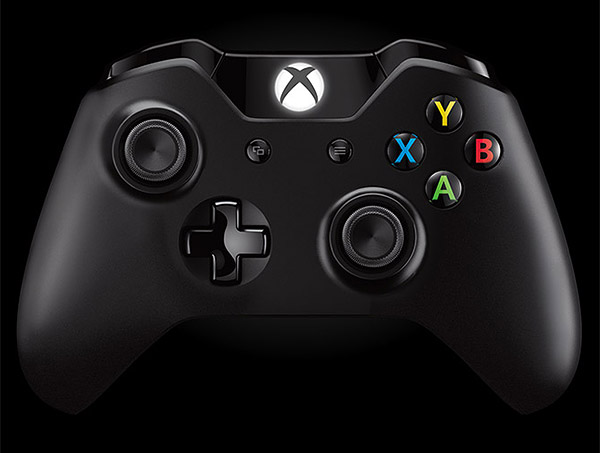 However, the new controller offers an improved and more responsive D-Pad, grippy edges on its thumbsticks, more refined ergonomics, Wi-Fi Direct connectivity, and something called “Impulse” triggers – which is basically force-feedback for your trigger fingers. 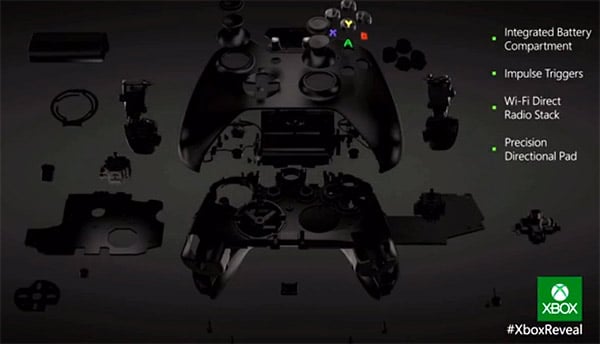 The third method of control for Xbox One will be Smartglass, which is said to be much better integrated, since it’s part of the platform from day one.

With Microsoft focused on the living room experience, they showed off how the system will operate without need for a remote control. The Xbox One will offer sophisticated, natural language voice recognition, and will automatically turn on by simply saying “Xbox On.”  Yes, Microsoft wants you to use gesture and voice control and say goodbye to your remote control forever.

The system will also continually be in a standby mode, so you can turn it on instantly. 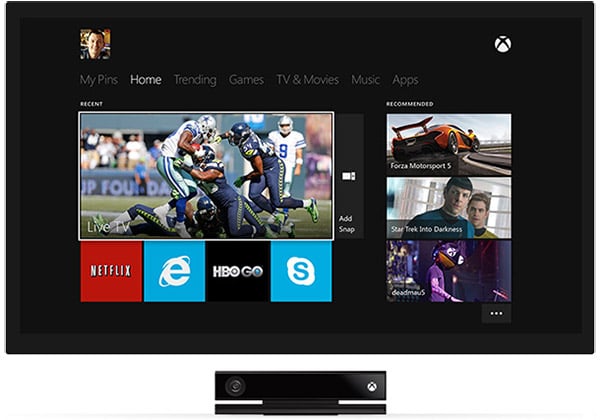 To watch live TV, for instance, you simply need to say “Xbox, Watch TV.” You’ll be able to instantly switch between inputs, ranging from television, to movies, to music and games. The Kinect also acts as a universal remote for your cable or satellite box and TV. It’s unclear at this point how multiple source inputs will be handled, since it appears the console only has a single HDMI input, though. I suppose they still expect you to maintain a separate receiver if you have multiple HDMI devices. So much for “All-in-one.”

Xbox One will support a Windows-like “Snap” mode, so you can multitask between entertainment content and other applications, such as browsing the web or Skype chats. One cool example they showed off was to switch on contextual sports scores and fantasy leagues while watching live TV on ESPN. 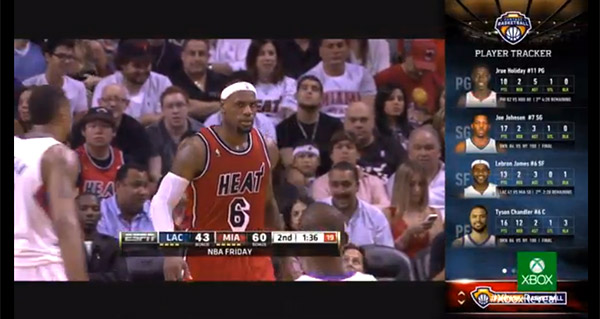 You’ll also be able to navigate a full TV guide, and change channels and find out what’s on using your voice and gestures. The Xbox Trending screen will show you what’s popular throughout the Xbox One ecosystem. 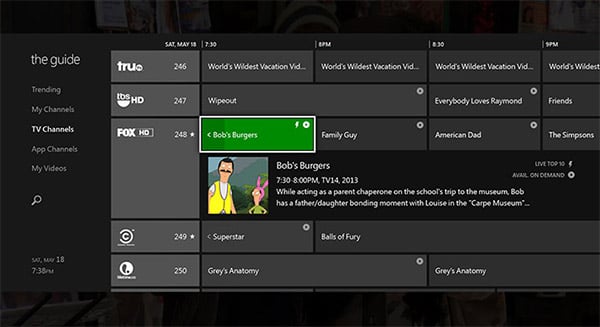 Not too many games were announced today, presumably so Microsoft doesn’t blow its wad before E3 in two weeks. However, they did reveal a few things coming down the pike…

EA announced new versions of FIFA, Madden, NBA Live and UFC for the Xbox One, and also hinted at a deeper strategic partnership with Microsoft. With their recent announcement that they’re not making any new games for the Wii U, I wonder if they might be betting big on Microsoft for this generation. 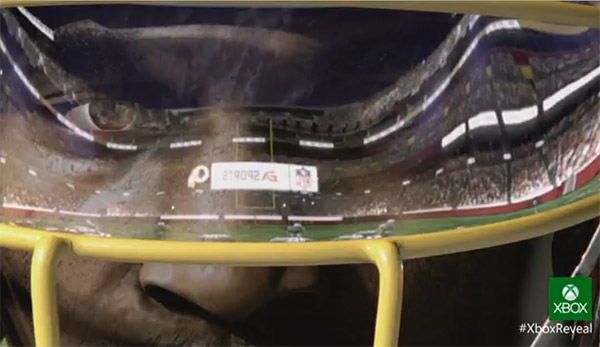 EA Sports’ new games will run on a new engine called “EA Ignite,” with the goal of blurring the line between real and virtual. The new games will offer much more sophisticated AI, and player interactions, and graphics which look as close to reality as you’ve seen on a console.

Microsoft Studios revealed Forza Motorsport 5, which will be a launch title, as well as Remedy’s new Quantum Break, a mysterious new action adventure in which time is some sort of gameplay component. The gameplay footage also showed off some impressive destructible environments.

Microsoft Studios says they’ve got a total of 15 exclusive games in the works for release within the first year, and eight of those titles are brand new franchises.

Last, but not least, Infinity Ward showed off the already revealed Call of Duty: Ghosts, which will run on a brand new next-gen engine, with many new gameplay elements, new moves, and immersive visuals which include interactive fluid and smoke.

One thing which was not elaborated on was the rumor that the Xbox One will require an always-on Internet connection, though its clear that its functionality will be hampered without one. Microsoft stated that not only will save games and downloaded content be stored “in the cloud,” but that game developers can actually harness the power of the Xbox Live infrastructure to perform computations.

Just how much power is going into the new Xbox Live service? The current system has a footprint of about 15,000 servers, while the new Xbox Live will start off with 300,000 servers. That’s definitely a commitment to “the cloud” on Microsoft’s part. Cloud computing will be available to developers for improved mathematical power, and to create persistent online worlds. One other nifty feature of Xbox Live will be the ability to do background matchmaking for other games while playing. You’ll also be able to rack up new cross-game achievements  Similarly to the PS4, there will also be native support for capturing and sharing gameplay recordings and images with your friends using the Xbox One’s “Game DVR” functionality. 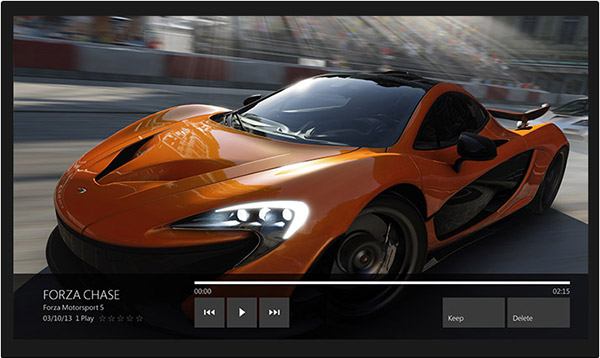 Unfortunately, Microsoft didn’t show their hand in terms of pricing or a release date, though they did make the vague committment that the Xbox One will be available “Around the world, later this year.” You can expect many more details on launch titles and the system in about two weeks during E3 2013.