Ahoy assassin! If you thought the Assassin’s Creed: Brotherhood Hidden Blade Replica was too flamboyant, perhaps the blade’s updated version will be more to your liking. Made by McFarlane Toys, this life-size replica forgoes the shiny PVC vambrace for a simpler one made of leather. I meant leathARRRR.

As with the previous replica, you don’t have to worry about being hurt or hurting someone with the blade because it’s made of soft plastic. Todd McFarlane himself told Kotaku, “When you press the spring it actually shoots out, like a blade should. There’s a snap to it. Then you get to the end and realize you can curl the tip on it, so it’s not going to do any real damage.” 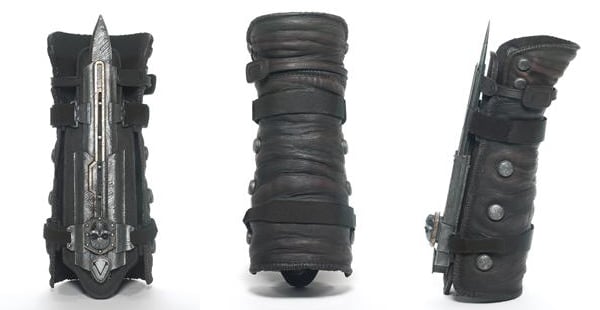 Set sail for Gamestop to pre-order the Assassin’s Creed IV Hidden Blade Replica for $40(USD). It is a rare piece of treasure, for it is one of the few remaining reminders of what an assassin used to be. Nowadays, I wouldn’t be surprised if Edward Kenway will end up having a hidden ship cannon gauntlet and neon-colored clothes.