I recently had an opportunity to drive Buick’s new upstart crossover SUV, the 2013 Encore, and there’s a single word I’d like to use to describe my experience – pleasant. Yes, this small vehicle is comfortable, luxurious, loaded with modern-day conveniences, and well appointed for the price. It’s not going to win any prizes for speed or being a true “driver’s car”, but as an everyday ride, the Encore fires on all cylinders. 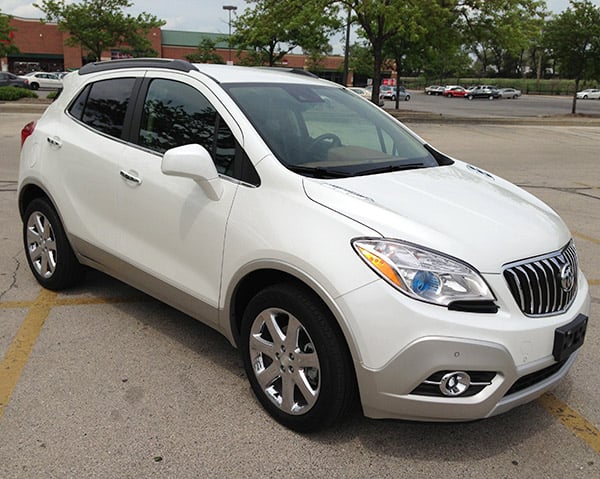 Overall I found the exterior design of the Encore to be quite pleasant on the eyes, exuding a sense of luxury, without being too showy. The first thing you’ll notice about the Encore is just how small it is compared to other SUVs. With a wheelbase of just 100.6 inches and a tip-to-tail length of just 168.5 inches, you should have no problem fitting the Encore into even the most cramped parallel parking spaces. There aren’t a lot of direct competitors to the Encore – the closest would be the Nissan Juke (less luxurious, more sporty), and the BMW X1 (more powerful, more expensive). 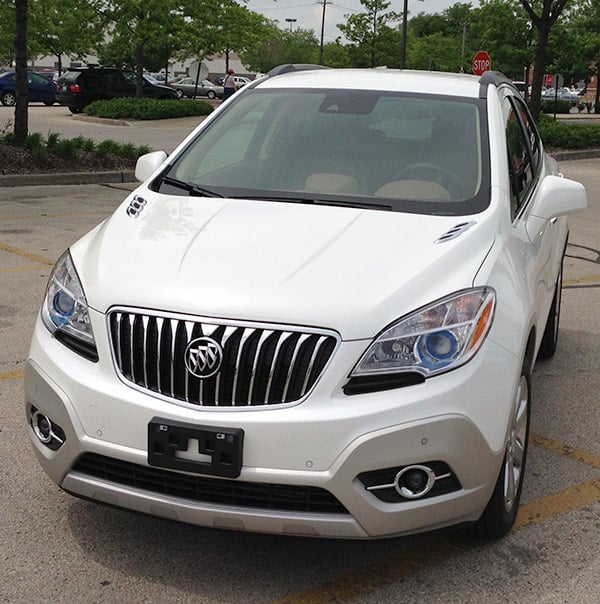 Despite its small footprint, the Encore seems spacious on the inside – especially compared to sedans and station wagons. It offers ample seating for four adults, and you can squeeze a fifth passenger in the back seat if you must. Speaking of the back seat, I was able to set comfortably in the back with the front seats about 1/2 way back – and I’m 6-feet-tall. The back seat also offers a flat-folding 60/40 split folding bench so you can carry more items in the back, for a total capacity of up to 48.4 cubic feet. As an added bonus, you can fold the front passenger seat flat for even more storage space. Keep in mind that in exchange for this, you sacrifice the left armrest on the passenger seat, and my co-pilot was quick to point this out. 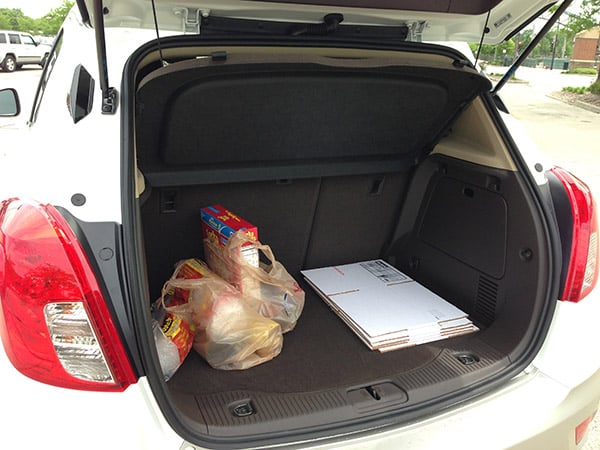 The vehicle is packed with luxury touches you wouldn’t expect in a vehicle that starts at less than $30,000(USD). Features included on the AWD-Premium model I tested include some of the nicest two-tone leather seats I’ve ever seen, a stitched leather steering wheel, and (simulated) woodgrain trim. 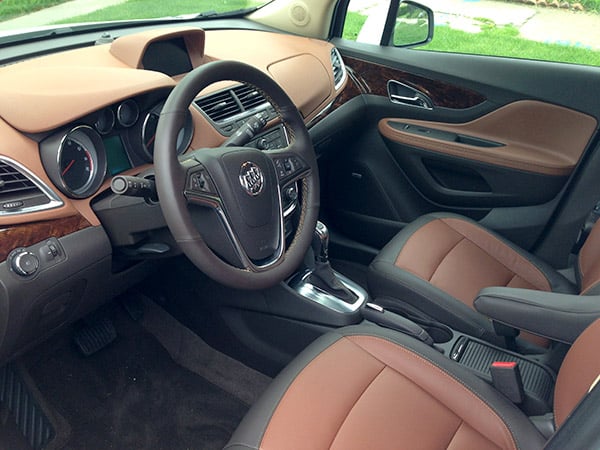 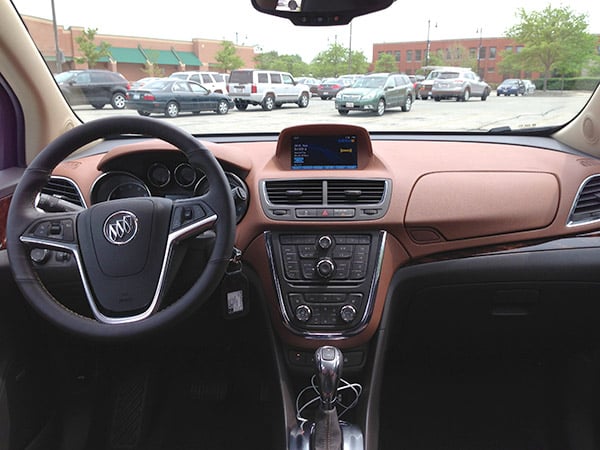 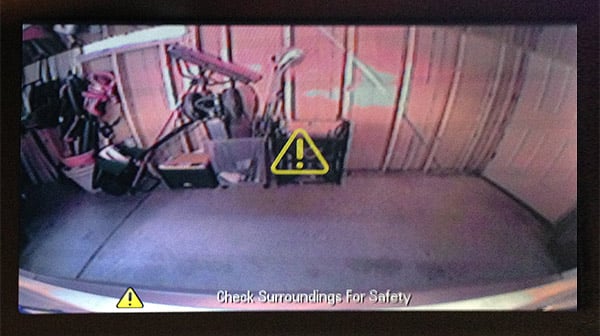 Technology that comes standard includes Bluetooth hands-free calling and media playback, AM/FM/SiriusXM (subscription) radio, as well as Pandora and Stitcher streamed audio integration powered by Buick’s Intellilink. You’ll also get GM’s vaunted OnStar service with 6 months of complimentary service. Navigation is optional, going for an extra $795. All media, climate, navigation and phone information is displayed on an ample 7-inch display that’s been placed much closer to eye level than many of the displays out there. 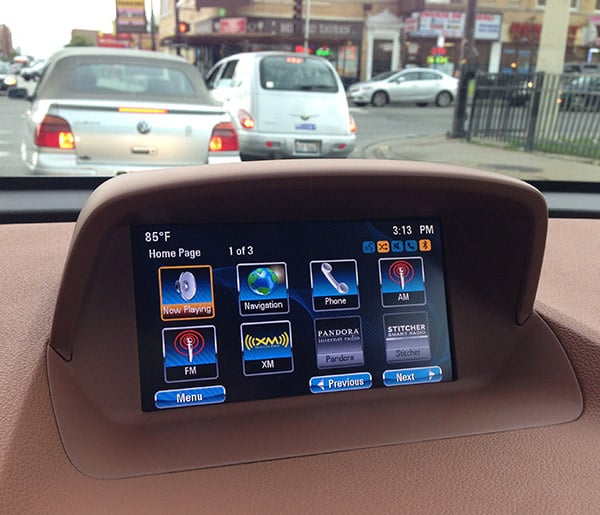 One thing to note is that the media, entertainment and climate controls are operated via a number of buttons and analog dials. While some people prefer using touchscreens for such features, I’m a big proponent of tactile controls when driving, so you can interact with them without having to take your eyes off the road. So even if it’s not the most sexy, high-tech approach, I personally agree with this decision. 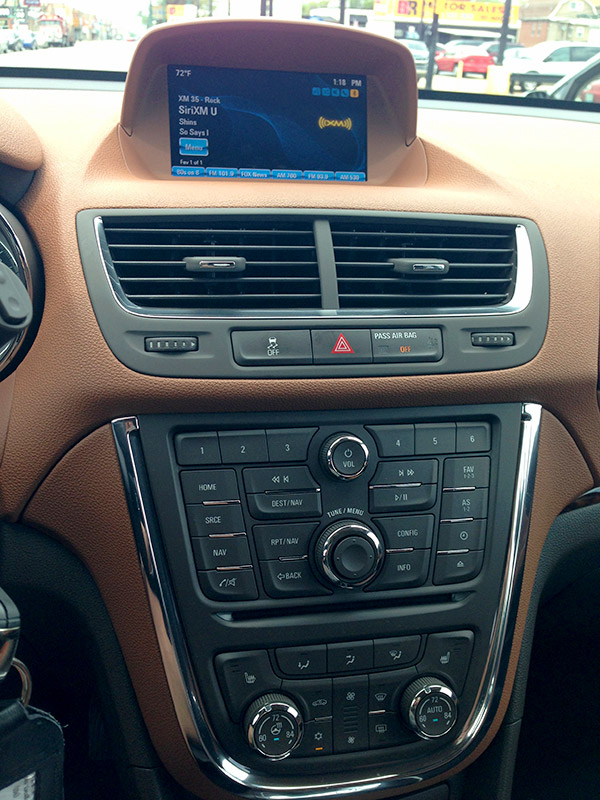 I found the drive of the Encore to be quite pleasant, with a quiet passenger compartment and minimal road noise – with some of this benefit potentially coming from the Bose Active Noise Cancellation system. I also found the handling to be tight, but not overly sporty – somewhere smack dab in the middle between the disconnected feeling you’d get from a Lexus SUV, and the sporty handling of a BMW or Infinity SUV. Again, pleasant. 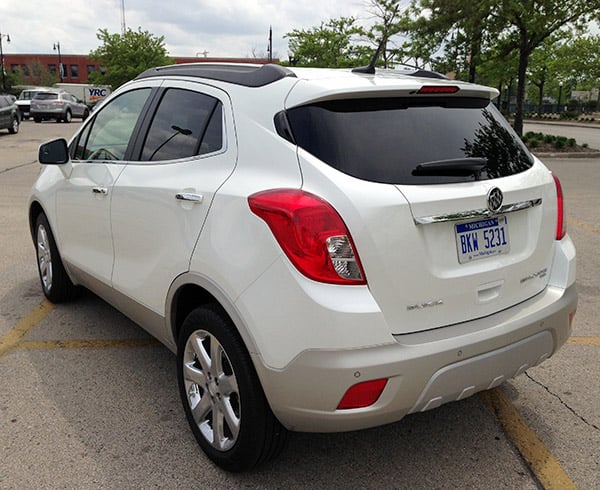 Under the hood of the Encore is a 1.4-liter turbocharged DOHC 4-cylinder engine, attached to a 6-speed transmission with manual override. This combination provides 138HP and 148 lb. ft. of torque. I found this power to be plentiful in city driving, though I did find it to feel a little strained when driving on the highway. It’s not that it isn’t capable of pulling along the vehicle at highway speeds – it’s just got that typical 4-cylinder whirr sound when accelerating at higher speeds. That said, you have to remember this is the same Ecotec engine in the Chevy Sonic turbo, a car that weighs almost 600 pounds less than the Encore.

On that note, fuel economy wasn’t as good as I had hoped, with city driving delivering a less-than-stellar 15MPG, though I got a much better near-sticker 29MPG on the highway. To be fair on the city mileage, I live in Chicago, which has a higher than normal amount of city stop and start traffic. That said, when I drove it on suburban side streets, I got just about 19MPG. In addition, my figures were measured with typical comfort features such as radio and air conditioning turned on. 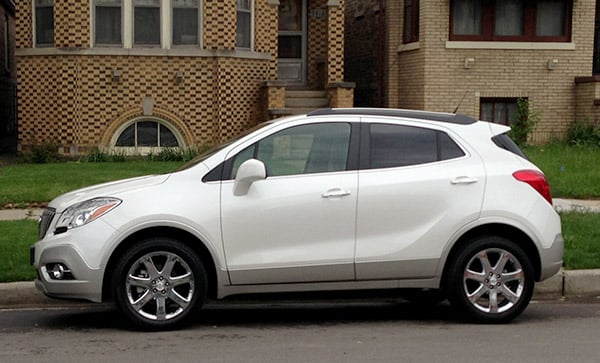 So there you have it. If I were in the market for a starter SUV – or if I were looking to downsize from a big truck-like model, the Encore would be on my consideration list. With its perfectly pleasant styling, luxury, tech and safety features, as well as an attractive price point, it’s definitely worth a look.

Prices for the Buick Encore start at just $24,200(USD), but you’ll want to opt for the Premium AWD edition if you can – the gorgeous leather interior and heated accessories are worth it alone. Plus, if you live anywhere where it snows or is hilly, you’ll want to go with the AWD anyhow. As equipped, the fully-loaded Encore I tested had a sticker price of $32,975.

Disclosure: Buick provided the loan of the vehicle for review in this article. However, all reviews are the unbiased views of our editorial staff, and we will only recommend products or services we have used personally, and believe will be good for our readers.