Have you ever accidentally formed a shape or a letter while playing Tetris? Felt swell did you? As always, the Internet is here to remind you that other people are much more awesome than your are. First up is Michael Birken, who wrote a software algorithm that can draw a portrait by playing a modified version of Tetris. 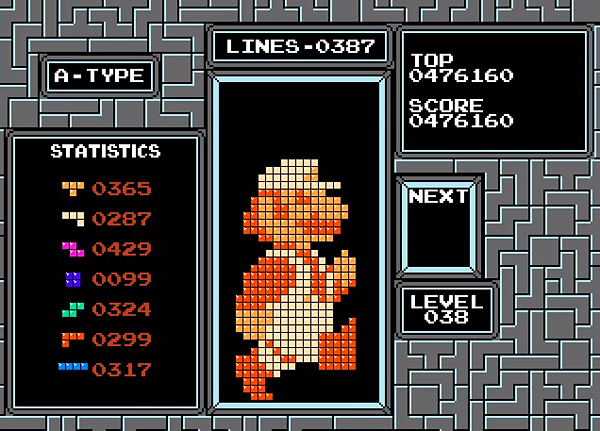 As I mentioned above, Birken’s Tetris Printer algorithm needs to use a custom variant of Tetris. The game field is bigger and the algorithm also controls the sequence of pieces. But it’s still very remarkable because it actually plays by the rule of the game, i.e. if it forms a horizontal line, that line is wiped out and so on. That means it has to go through ridiculously tedious methods to accomplish the simplest of tasks.

For instance, all tetrominoes are made of four blocks. So what if it only needs to “draw” one block? Birken states, “To generate an individual square, the algorithm assembles a structure consisting of a rectangular region fully supported by a single square protruding from the bottom. When the rectangular region is completed, its rows are cleared, leaving behind the protruding square.”

You can head to Birken’s website for his full explanation and the source code of Tetris Printer. Or just play the video below and enjoy the result:

Surely such precise manipulations can only be done by machines and their cold logic. WRONG. YouTuber John Schuepbach aka Shuey187 is the human equivalent of the Tetris Printer. As in, he doesn’t know which pieces will come out. He just plays and plays and plays, taking each little opportunity the game gives him so he can impose his will on the game’s relentless chaos. In fact, he’s been doing this way before Birken ever came up with his algorithm. Here he is painstakingly drawing Mario:

That took him 90 minutes and he wasn’t even able to complete Mario’s hat. But holy crap. What’s next? Printing in a Tetris game in a Minecraft game in an emulator in Garry’s Mod?

[via BuzzFeed, The Daily Dot & Joystiq]