Acer has unveiled a Star Trek themed notebook that looks stunning. In fact, it looks like it came right from the bridge of the rebooted Enterprise. The Acer Aspire R7 Star Trek Limited Edition. It kind of looks like the Enterprise herself when opened up halfway.

This special edition notebook features a stainless steel Star Trek logo emblazoned on it too just so you get the point. The R7 also features a repositioned keyboard and trackpad and a high-definition touchscreen mounted on a “revolutionary ‘Ezel’ hinge” that allows it to flip, reverse, lie flat or float – though you don’t need the Star Trek edition to get this feature. 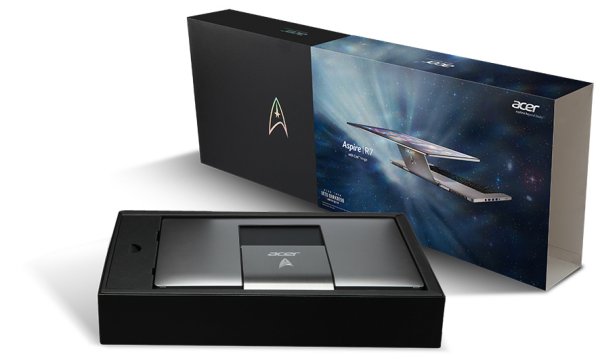 Acer has created only 25 of them and they will be auctioning a single unit off, with the proceeds going to two charities, The Mission Continues and Save the Children.

The computer comes with a Star Trek Into Darkness film poster signed by the cast, special content like wallpapers and videos from the movie, a soundtrack, a download of Star Trek: The Video Game, and Star Trek packaging.

To bid, head on over to http://www.ebay.com/theonlyone. Bidding starts on June 14th. You know your friends won’t have one, so be sure to bid.