Before the Xbox One was announced, the Internet was inundated with rumors about how you wouldn’t be able to play used games on the console, how it was going to require an Internet connection and how its brand new Kinect is sorry, but it’s afraid it can’t let you do that Dave. Now the inundation begins anew, with many of the rumored restrictions confirmed by Microsoft itself on the official Xbox site. 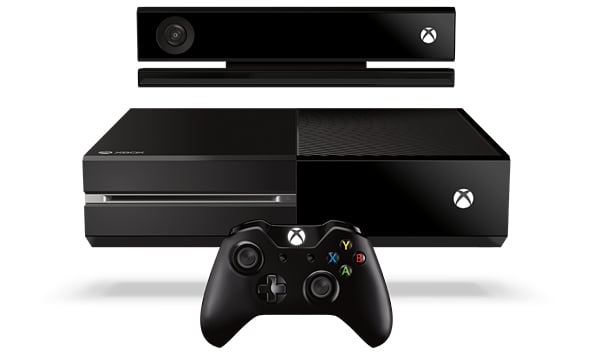 The Xbox site has a series of articles dedicated to explaining what the player may or may not do – and in some instances has to do – in order to use the console. The articles themselves are explained in simple language and are quite brief. But in case you’re busy preparing a petition urging the White House to send all Xbox One units to the Marianas Trench, the picture below – which as far as I can tell was originally posted at a thread in the 360crunch.net forums – summarizes the articles, albeit with a decidedly negative tone. 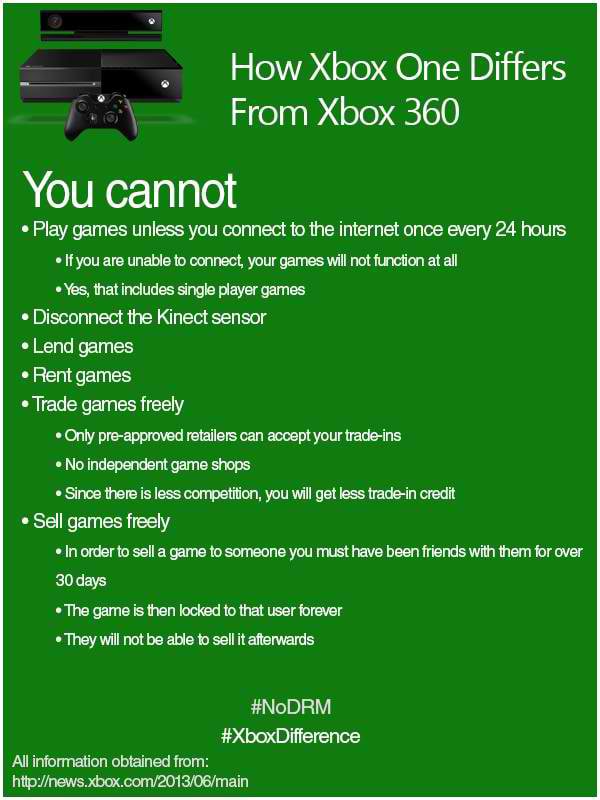 After reading the articles themselves, I can confirm most of what’s written on the picture, except for a few things. First of all, the 24-hour restriction only applies if you’re playing on your primary console. If you sign in to your account on another console, the restriction gets worse: that console has to connect at least once an hour for you to keep playing: 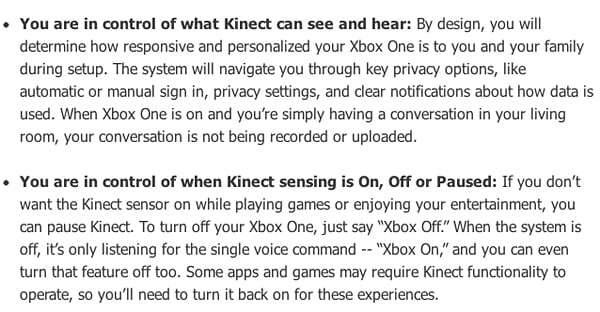 The green poster above is also incorrect in saying that it’s impossible lend games. It’s actually possible. It’s to just nearly impossible. You can lend a game disc to someone, as long as you follow the rules outlined above for selling. There’s also another form of lending or sharing that the Xbox One allows: “Xbox One will enable new forms of access for families. Up to ten members of your family can log in and play from your shared games library on any Xbox One.” The thing is, I don’t know how Microsoft can distinguish who your “family” is: 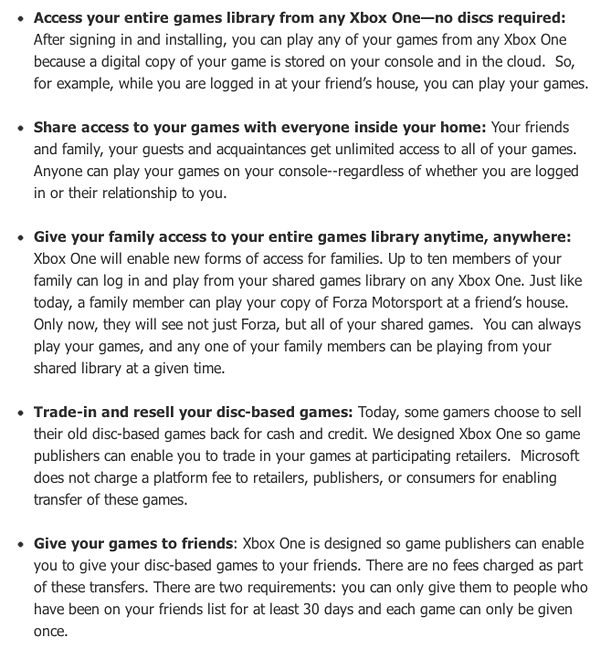 Overall, I think we can take away seven things with these revelations. First, if you’re planning on buying an Xbox One, you should read the articles on the Xbox One website. Yes, they are restrictive and confusing, but at least Microsoft finally came clean. The information is there, so it’s your fault if you remain uninformed.

Second, we would be fools to assume that the PlayStation 4 would have none of the Xbox One’s restrictions, especially when it comes to lending, sharing or trading-in used games. Why? Because the publishers will be the ones to decide whether you can trade-in, sell or lend Xbox One game discs, NOT Microsoft:

It stands to reason that many of those publishers will also want those same policies to be available with Sony’s console. So if you’re truly concerned about these policies, don’t pre-order a PS4 just yet. Wait until Sony reveals its policies as well.

Third, even if you’re not planning on buying an Xbox One, as long as you’re a gamer you still have to be concerned about this. These are paradigm-shifting declarations from one of the world’s most powerful forces in the videogame industry. If they don’t meet much resistance, then other companies and people will follow suit and these declarations will become status quo. And what exactly are these declarations? That there is no such thing as a second hand game unless they say so, and that it is okay to assume that ALL gamers are software pirates and thus must be controlled and policed without exception. Yes, even Dave’s 5-year-old brother.

Fifth, we have access to the Internet at all times, and game companies never have connection problems on their end. The launch days of SimCity, Diablo III and all MMORPGs ever made all went smoothly without zero problems.

Sixth, Dave is so screwed.

Seventh, the worst thing you can say while someone else is playing on the Xbox One is “Xbox Off.”