VelociRoACH Hits the Ground Running… and Raid Won’t Stop It

Remember that Tom Selleck sci-fi flick called Runaway? Despite being terribly cheesy, those insect-like robots in that movie always gave me the creeps. Never mind that it was none other than KISS’ Gene Simmons who was the mastermind behind the robobugs.

While this robotic insect isn’t deadly, you’ll have a really hard time catching and swatting it if it ever were to go rogue. 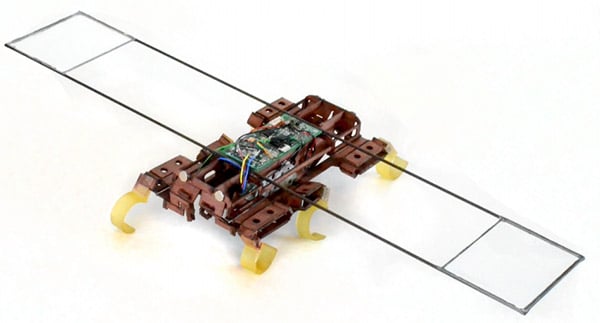 Created by Duncan W. Haldane, Kevin C. Peterson, Fernando L. Garcia Bermudez, and Ronald S. Fearing of the UC Berkeley Biomimetic Millisystems Lab, the VelociRoACH is claimed to be the fastest legged robot relative to its body size. It’s capable of running at a zippy 2.7 meters-per-second. Yikes. Just wait till about 10 seconds into the video below to see it scurrying along in real time.

The robot was built with a new dynamic tuning system which keeps it stable at high speeds, using an aerodynamic rotational damper which is designed to operate with less rotational energy while still maintaining crazy fast forward momentum. The robot is also equipped with a mechanism which lets it crawl over obstacles about twice its height with ease.

I’m not sure what the real-world applications from the VelociRoACH are, but I sure wouldn’t want these running around my house.