iRobot Ava 500 Video Collaboration Robot : A Roomba with a View

The company that became known for its humble robots for cleaning homes will soon be selling a fancy robot for offices. Coming in 2014, iRobot’s Ava 500 will let you work both remotely and on site. It has a 21.5″ HD screen, a webcam, a microphone and its predecessor’s ability to find its way around on its own. Depending on your office dynamics, the Ava 500 will either be a hilarious or a creepy sight. 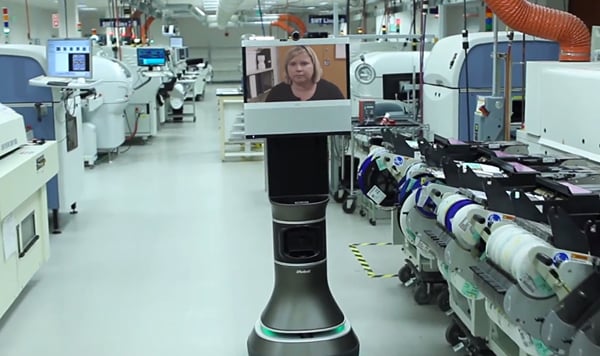 According to iRobot, the Ava 500 can explore and map its assigned area on its own. The idea is for its user to direct it remotely using an iPad app. You just have to pick the robot’s destination and it will figure out how to get there on its own. So no, you won’t be able to “drive’ it and yes, it’s still pretty impressive.

Aside from the iPad app, iRobot says it will provide users with Cisco TelePresence EX60 monitors. The Ava 500 can also adjust its body’s height so that its monitor will be at the appropriate level at all times. When you’re done using the Ava 500, it will return to its charging station on its own. It’ll probably chat with the other ‘bots about that cute copier and how annoying that security cam dude is.

I wonder how many takes that meeting scene took. If I was there I wouldn’t be able to stop laughing when the robot rolls in the room. He looks constipated. And can you imagine a future where the only “employees” in the office are all Ava 500s? The Ava 500s will be so busy they’ll have to use other Ava 500s to do their job.

[iRobot via The Boston Globe]