Don’t Try This at Home: Norah the Jet Bicycle

Colin Furze has a need for speed, and he’s not afraid to get his hands dirty in order to speed up stuff that normally doesn’t go more than a few miles an hour. That’s because they’re not supposed to exceed those speeds, but hey, tell than to Colin.

If his name sounds familiar or if you feel like you’ve seen him before, then maybe you already have since he’s the guy behind the baby stroller that can go as fast as 50mph. 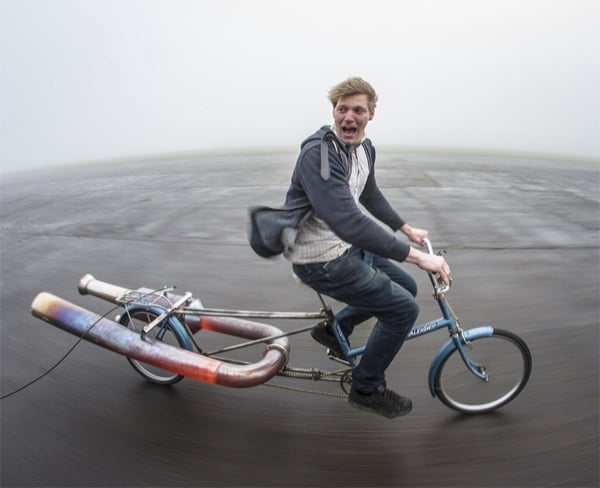 This time around, Colin set his sights on a plain old bicycle.

When he was done with it, the bike had been completely transformed into a jet pulse bike. And because the previous owner of the bike was his friend’s mom named Norah, that’s what the bike has been named also.

The bike is elongated for two reasons: to fit the jet and to make sure that the cyclist doesn’t get burned while he’s on it. Colin explains: “Had I binned the pedals idea, yeah, it could have been shorter, but the heat this thing chucks of is intense, and at times I’ve struggled to turn a valve of 40 centimeters away from it, so sitting on top of it would need some sort of heat shield, and I think it would start to look less bicycle like.”

Because of this, Norah was cut and stretched by almost one meter. Check out the video above to see this insanely dangerous ride in action.