Flying Bike Will Get You out of a Traffic Jam

How’d you like to be able to fly over the traffic while riding your bike to work? This flying bike could be just the ticket. This remote-controlled bike actually left the ground for about five minutes. But not with a human onboard. A styrofoam dummy was used instead because it still needs more powerful propellers to carry a real passenger. 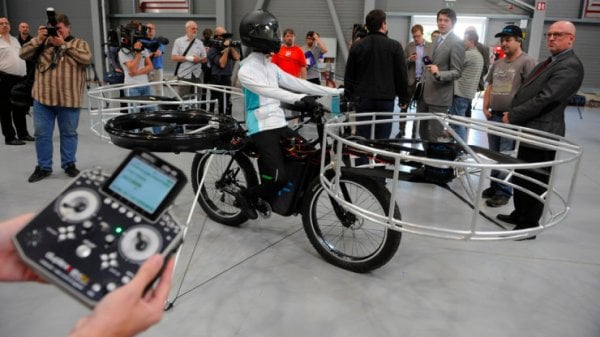 The helicopter bike comes from a teamup of three Czech companies. It has four large, battery-powered propellers mounted inside two cages, and weighs a total of 209lbs. It may not do much more than lift off and hover a few feet off the ground, but as they improve things it will get better. Imagine a future full of flying bikes. Of course, if they looked like this, they’d have to fly all of the time, because this thing is too wide and long for the road. It’s also ridiculously loud. Yeah it isn’t very practical. It’s more a proof of concept. But it’s still pretty fun to watch it in flight…

Still, if they can make the engine stronger and have the pilot sitting back more, it could be an economical way to put flying vehicles in the sky.