This Robot Will Beat You at Air Hockey

If you fancy yourself a good air hockey player, this robot may have a thing or two to teach you. It comes from Japanese researchers at Chiba University’s Namiki Lab. It is pretty good at competing against human players because the robot changes its strategy based on its human opponent’s playing style. Think you have what it takes to win? 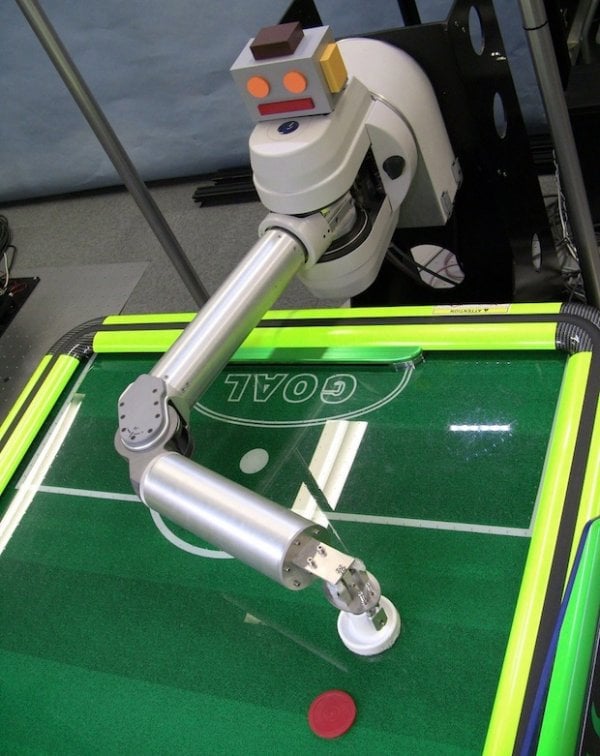 The system is comprised of an air-hockey table, a four-axis robotic arm, two high-speed cameras, and an external PC. The robot tracks the movement of your puck and paddle, using position data from the camera images that are processed by the PC, and uses that data to figure out how to react.

You may think you are fast, but the robot is faster, tracking the game at 500 frames-per-second. This ‘bot already knows its next move when you are reacting to that last shot. It already knows your next move as it counters your last hit. It can’t be stopped. It can’t be reasoned with… Sorry. The point is that you aren’t fast from the robot’s point of view. It is playing in a kind of Matrix-style bullet-time, because it is so much faster than you.

To make it more fair for those who play this robot, researchers programmed the robot with a three-layer control system. The first layer is responsible for basic motion control of hardware. A second layer decides its short-term strategy. Things like whether it should hit the puck, defend the goal, or stay still. The third layer is all about long-term strategy and throwing it’s superiority in your face. If you are playing aggressively, it will too. If you are defensive, it will become defensive. How can you win? Well, you can kill it at least. It’ll never see that sledgehammer coming.

[via IEEE Spectrum via Botropolis]