How Much Would it Cost to 3D Print Your House?

3D printing continues to become more mainstream, with some printers hitting the market for under $400(USD) now. While the technology is still in its relative infancy, it’s only a matter of time before 3D printing is used to build everything from gadgets to toys to cars and even houses. The technology is still too slow and costly to do the latter, but that didn’t stop one site from figuring out how today’s 3D printing tech could be used to print the bricks for your next home. 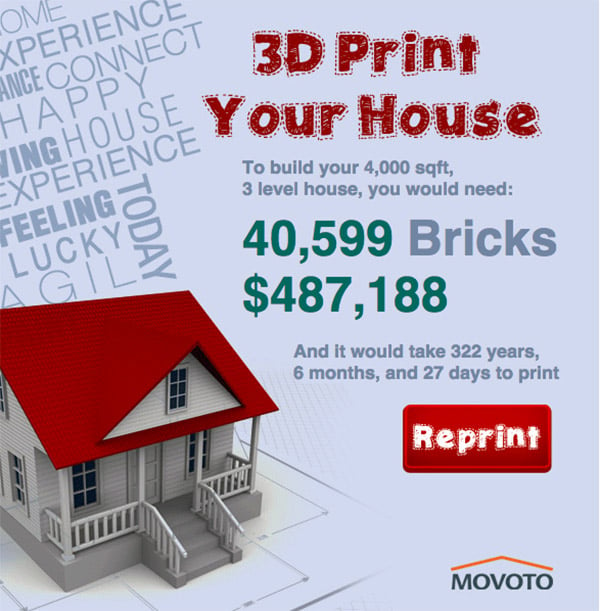 The guys at the Movoto blog came up with a calculator which can figure out how much money and time it would take to 3D print a house using today’s technology. If you look at the example above, a 4000 sq. ft., 3 level house would cost nearly $500,000 in plastic 3D printing materials, and take a whopping 322-1/2 years to complete on a single 3D printer. I’m not sure I can wait that long. Oh, and did I mention that’s just for the exterior bricks? You’ll still need to build the interior and roof the old fashioned way.

You can punch in your own home dimensions in the calculator below to see how much time and money it would take to 3D print your house:

On the plus side, 3D printing is getting faster and cheaper with every generation, so I’m sure that you’ll be able to print the components for large structures in much less time at some point during our lifetimes. Though I’m not sure it’ll ever be cheaper or faster than using traditional building materials.