We’ve seen how robotic quadcopters can be programmed to act and complete tasks together. These single propeller vehicles called Distributed Flight Array take that concept to the extreme. On its own, a single one of its aircrafts can barely take off and its flight is unstable. But when multiple modules connect, they become stable, can retain their formation on their own and even resist external forces. 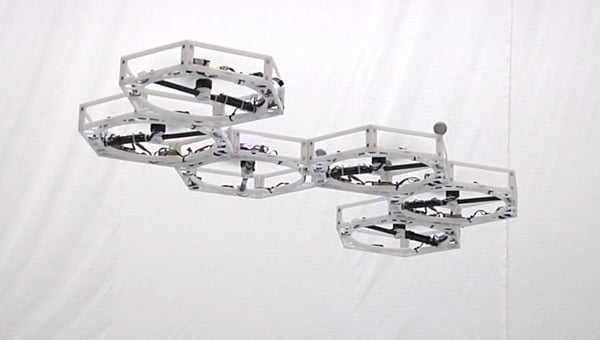 The Distributed Flight Array was conceived by Raffaello D’Andrea and Raymong Oung of the Swiss Federal Institute of Technology’s Institute for Dynamic Systems and Control. Each vehicle has its own power source, motor, computer and sensors. They also have tiny wheels that let them scurry on the ground. They attach to each other using magnets, which are apparently stable enough to keep them together in normal flight.