Because dogs don’t have to deal with work, other people and taking care of dogs, you can’t always match your pet’s enthusiasm and energy. But you can’t just leave your buddy hanging right? That’s why Grant and Denny Hamill invented the iFetch. Contrary to its name, this device throws balls for pets to fetch. And as far as some dogs are concerned, that’s all you’re good for anyway. 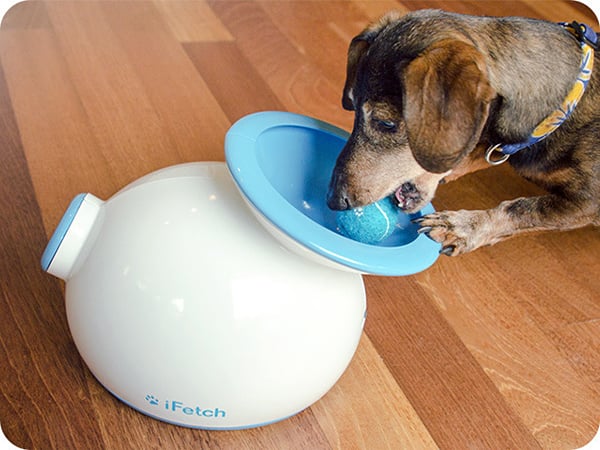 As you can see the iFetch has a large funnel-shaped opening. Place a ball on the funnel and the iFetch will turn on, and after a second or so it will launch the ball from its smaller hole and then turn itself off. It will do this tirelessly and without fail, until even your dog barfs just thinking of a ball. You can set the iFetch to throw the ball either 10ft, 20ft or 30ft away. The Hamills claim that the iFetch doesn’t throw the ball forcefully. Your dog won’t get hurt even if it stands right in front of the device when the ball is launched. It can be plugged into an outlet or powered using batteries, so you can even use it outside. It’ll be a hit at the park.

Man, that black and white dog reaaaally wants to play. Pledge at least $75 (USD) on Kickstarter to get an iFetch and three 40mm balls as a reward.  If you’re thinking of inventing the cat equivalent of the iFetch, don’t bother. It already exists. It’s called a box.